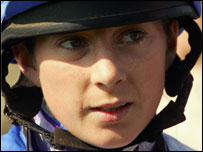 C4 MORNING LINE BRING US A WINDOW ON THE WORLD OF HORSERACING EVERY SATURDAY MORNING 8am - 9am .

THROUGH THE KEYHOLE THE CLUES ARE THERE, AN INTERESTING AND ENTERTAINING PROGRAM GUIDE WITH PREVIEWS, REVIEWS, KEY CURRENT NEWS, UPDATES, ALL RELEVENT TO THIS AFTERNOONS C4 LIVE ACTION FROM THESE TWO TRACKS .

http://www.turfcall.co.uk/montypage.htm
FOLLOWING UP THIS AFTERNOON TO BRING THE LIVE ACTION DIRECT FROM AINTREE AND PROVIDING A VIVID INTRODUCTION TO BLOODHORSE LITERACY BOTH IN THEORY AND IN PRACTICE.


TANYA  STEVENSON The Punters Champion  Tanya out on the track at Aintree
brings us her Betting Bulletin's, latest stats, market movers, introducing us to ANDREW TULLOCH Clerk of the Course and Director of Racing at Aintree Racecourse getting the latest news on the state of the going. http://www.aintree.co.uk/pages/horse-welfare/
AND meeting up with RUSS WISEMAN Head of Media at Sportingbet
http://uk.linkedin.com/pub/russ-wiseman/a/915/976
http://twitter.com/SportingbetRuss


SIMON HOLT CALLING THE HORSES
Simon brings us his form guide to the Tingle Creek Chase the feature race to be run at Sandown Park this afternoon at 3.05.
Simon has continued to cover many important events including the Cheltenham Festival, 1,000 and 2,000 Guineas, St Leger, King George VI Chase and, from 2007, Glorious Goodwood. He also called the Irish Derby once (in 2000 when Sinndar triumphed as RTE used the BBC's Jim McGrath to call the race in the absence of Tony O'Hehir), as well as the 2001 Prix de l'Arc de Triomphe when the TV rights briefly transferred from the BBC to Channel 4. Bloodhorse illiterate
http://en.wikipedia.org/wiki/Simon_Holt_(commentator)


JOHN (Greatest Jockey) FRANCOME (Bloodhorse Literate)
"A lifetimes experience to date, shared with the greatest professional horsemen and the greatest racehorses. A shining light on the bloodhorse literacy front that so desperately needs to be recognised properly by the powers that be world wide.
http://www.amazon.co.uk/John-Francome/e/B001H6GYLU/ref=ntt_dp_epwbk_0
http://www.amazon.co.uk/s/?ie=UTF8&keywords=john+francome+autobiography&tag=googhydr-21&index=stripbooks&hvadid=4795221559&ref=pd_sl_90p7j5pdbw_b
RICHARD HOILES Broadcaster  Commentator Presenter  Bloodhorse Illiterate.
RICHARD joins up with ALASTAIR at Aintree this morning getting ready for this afternoon's historic coverage breakthrough to show us two chases live from Aintree the 2.10 and 3.30.
http://steeplechasing.wordpress.com/2011/03/07/a-big-priced-festival-tip-from-richard-hoiles/


ALASTAIR DOWN Key Broadcaster Presenter Bloodhorse Illiterate ALASTAIR joins up with RICHARD at Aintree this morning getting ready for this afternoon's historic coverage breakthrough to show us two chases live from Aintree the 2.10 and 3.30.
Look after yourself Alastair, looks like you have a nasty flue germ.xx
http://www.channel4.com/programmes/channel-4-racing/pictures/channel-4-racing-presenters/6413fd0e-11f0-40fc-91d2-ff9c3b08a87e
http://journalisted.com/alastair-down
http://www.lovefilm.com/browse/contributor/58708/Alastair_Down.html

ALICE (In Wonderland) PLUNKETT BLOODHORSE LITERATE
The only lady rider to have ridden around Badminton and the Grand National. http://www.femalefirst.co.uk/alice-plunkett/


DAVID CARR TODAY'S BIG TALKING POINT -  IT REALLY WILL BE ALL ABOUT JUMPING IN TODAY'S FEATURE CHASES.


"TWO of the most spectacular tests the sport has to offer are staged more than 200 miles apart yet served up within an hour on an afternoon when even the most dyed-in-the-wool enthusiasts for Flat racing will surely take time off from Christmas shopping to tune in - and try to nab the huge Scoop6 rollover.


"Would you trudge round Currys while a field of top class chasers are going at it lickity-split in the Sportingbet Tingle Creek Chase, a fitting tribute to the spring -healed leaper who lends his name to a race that challenges the quickest two-milers to cope with the famous Railway fences coming up thick and fast in the back straight. The only afternoon in the year that offers the thrills and spills, thud and blunder of two races over the Grand National fences.


"The runners in the Becher Chase and Grand Sefton Chase this afternoon will be the first to tackle the course since the fatal injuries suffered by DOONEYS GATE and ORNAIS in the spring caused the BHA to set up a review to look into the safety of the Grand National. Changes to several fences were announced in August, with the drop on the landing side of Becher's Brook and the jump which is the first in the National reduced and the height of all toe boards, which gives horses a sighter at each fence, has been increased to 14 inches.. Aintree managing director Julian Thick said "As we said in the summer, we brought forward the announcement to give us plenty of time in order to make those changes so the course would be in  A1 condition in time for racing at this meeting and we're very pleased to say we have achieved that.
"Our thoughts are unchanged from any other meeting - and safety and welfare of horses and riders are our prime concern.
"I don't think we feel under any more pressure but the point we made then and we repeat now is that we believe this package of changes is good for the long term."

PAUSE FOR THOUGHT
CHANNEL 4 RACING THE STORY SO FAR
"1984 Channel 4 broadcasts racing for the first time after taking over ITV's midweek coverage. Begins Saturday broadcasts the following year.
1986 Lands early coup when stealing Arc from BBC and televises DANCING BRAVE'S win the same year. Develops reputation as serious force with live Breeders' Cup coverage.
1995 Loses Arc to BBC, but, more importantly, takes control of after sensationally stealing rights to the festival and all the track's major meetings.
2001 Suffers its biggest body blow when Epsom decides the would enjoy greater exposure on BBC. To guarantee the move, BBC hands over its Newbury days to commercial rival.
2004 Televises first race from after BBC permits it to cover Reynoldstown  Chase.
2005 Comes close to pulling out of racing and only continues after Tote and Levy Board commit to a £4 million sponsorship deal.
2007 Goodwood's 50-year association with BBC television ends as the racecourse grants rights to Glorious meeting to Channel 4.
2009 Takes over as contracted broadcaster of all 's showpiece jumps  meetings plus those at Haydock after BBC axes more than half its fixtures.
2010 Begins new three- year deal incorporating about 80 days per year, but only after Levy Board commits to a seven-figure subsidy and racing's rights holders pull back from mooted plan to hand back Cheltenham Festival  to BBC. Significant reverse later in year with announcement that BBC will cover first two British Champions Days.
2011 Covers action over the Grand National fences for the first time after BBC drops Aintree's Becher Chase card."


HORSERACING A UNIQUE AND REMARKABLE SPORT
Posted by Turfcall at 22:13

Email ThisBlogThis!Share to TwitterShare to FacebookShare to Pinterest
Labels: C4 join up with Aintree and Sandown Park to bring us six live races