Your Guide for Online Sports Betting Information
What is a Yankie ? What is a Patant? etc ... etc....
http://www.bannedsystems.co.uk/systems/bettingterms.htm
http://www.online-betting.me.uk/betting-a-to-z.html


How to put on a super yankee
http://www.youtube.com/watch?v=gacqF-mVUPY

"GOLDEN HALF-HOUR FOR PRICEWISE FOLLOWERS  as bookmakers are hit by terrific trio."

"A THREE-WINNER salvo from Pricewise in the space of half an hour yesterday  left bookmakers facing individual six-figure losses, as the industry as incurred collective losses running into millions.

"Pricewise's Tom Segal  hugely profitable 30 minutes began in the notoriously competitive Ayr Gold Cup, in which Tom's tip CAPTAIN RAMIUS shot clear of the field to win in a manner befitting an odds-on shot. Tom advised his selection at 33-1 with bet365 and the Kevin Ryan-trained runner was backed into to 16-1 at the off.

"With the bookies reeling from the big-race strike, attention turned south to Newbury, where SWISS SPIRIT the middle leg of Tom's stunning treble made it a rapid double for Tom. The advised price was 9-1 with Paddy Power although punters who snapped up the early price  were subject to a 15p deduction under rule 4. The starting price was 3-1.
"Finally, in the unstoppable form of a- prize fighter with his apponent  pinned against the ropes, Tom landed the knock out blow at Newmarket, where the aptly named DOMINATION charged home in front. He was advised at 12-1 and sent off at 13-2.
"Pat Cooney of bet365, who had offered top price about CAPTAIN RAMIUS , described it as the firm's "worst Saturday for a long long time." while Paddy Power estimated the damage caused by TOM'S selections as close to £500,000.

"Paddy Power said around 50 punters had won sums of between £1,000 and £5,000. after including Tom's horses in Lucky 15s, yankies, doubles, trebles, and other accumulators.


"One British punter, who placed a bet using the firm's iPad app was said to have picked up £9,000 from an outlay of £65 after featuring Tom's three winners in a series of bets with two losers and Jack Dexter received a positive mention in Tom's column.

"Paddy Power said: Pricewise was in monster form with the three winners, which were all heavily backed, making it a very expensive   day for us. SWISS SPIRIT  was probably our worst result, being backed into 3-1 from 9-1, and Tom cost us around half a million pounds including multiple  bets as well."

"Cooney said: "We had super Saturday in the Olympics a few weeks ago and it was pretty much that all over again for the punters today. We were top price about the Ayr Gold Cup winner, which was a poor result, and the damage is certainly into six figures.
"We tried to make a case for CAPTAIN RAMIUS but from our point of view he was just one of several with some sort of chance."

"Betfred simply called it a bloodbath."


WIN: MOOHAAJIM (IRE) 2 9-1 partner ADAM KIRBY minder presenter RHYS EVANS. trainer Marco Botti for Sheikh Mohammed Bin Khalifa Al Maktoum, distance one and three quarters of a length at 5-2f.
2nd MASTER OF WAR 9-2 distance a neck from  3rd TAAYEL10-1
Jon Lees tells us "MOOHAAJIM paid a compliment to leading juvenile RECKLESS ABANDON (trainer Clive Cox) while igniting his own Classic pretensions with an emphatic victory in the Dubai Duty Free MILL REEF Stakes (6f). ADAM said "he was always in control, MOOHAAJIM travelled well and he has a tremendous turn of foot. He is entered in the Dewhurst Stakes and the Middle Park Stakes both to be run at Newmarket on Saturday October 13th 2012 .
http://www.racingpost.com/horses2/cards/card.sd?race_id=560436&r_date=2012-09-22#raceTabs=sc_


WIN: CAPTAIN RAMIUS (IRE) 6 9-0 partner PAT SMULLEN minder presenter MOHAMMED UMAR trainer Kevin Ryan for Clodagh McStay breeder PG Lyons at
16-1 backed down from 33-1 distance two and a half lengths from REGAL PARADE 25-1.
TOM O'RYAN reports "EUROPE'S richest sprint handicap, or a lottery on legs as some call it. So how difficult is it to clynch the Ayr Gold Cup? Ask Kevin Ryan . Repeating his success of 12 months ago and for the third time in six years, the Hambleton trainer struck it rich
with CAPTAIN RAMIUS , who ran out a decisive winner of the William - Hill sponsored showpiece under six- time Irish champion  PAT SMULLEN, the jockey  making his first visit to the course a memorable one. Two and a half lengths was the winning margin, a massive distance in such a tightly lit event. "
http://www.racingpost.com/horses2/cards/card.sd?race_id=561647&r_date=2012-09-22#raceTabs=sc_

The home and heart of British horseracing


NEWMARKET OPENING ITS DOORS TODAY 9am

NEWMARKET 'S  OPEN DAY starts at 9am, and Jacko Fanshawe (@jackofanshawe) tweeted: "Nice morning in Newmarket so get on over to the Open Day. Come and see Society Rock, Dandino, High Jinx and all their friends at Pegasus." ( 1 hour ago)

Taking a closer look
at all the work that goes on behind the scenes
to prepare these horses for the race tracks.
The different standards
within the bloodhorse literacy zone

"If it is decided that he will have another race this season then we're really talking about either the Arc or the Qipco Champion Stakes and it could be the Arc for him." (21 mins ago) 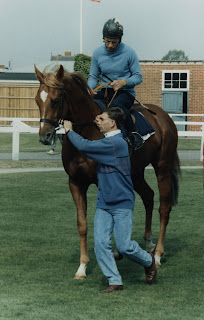 LIVE CH4 coverage this morning  join - up with Ayr, Newbury

and Newmarket . Beautifully presented and a joy to watch.

C4 AFTERNOON TEAM (PM)
Who will be the guest superstars this afternoon?

LIVE CH4 coverage this afternoon join - up  with Ayr, Newbury
and Newmarket .  Beautifully presented and a joy to watch.

Seriously dangerous  interference took place in
the first two furlongs of this race.


LAST SATURDAY'S ST LEGER RESULT
It was MAIN SEQUENCE (USA) 3 9-0 partner T E DURCAN  10-1 who eventually finished 5th of the 9 runners, who scuppered CAMELOT'S chances to achieve the Triple Crown as MAIN SEQUENCE clipped CAMELOT  heels at about the first furlong marker. Due to this both these horses and their riders could have been brought down, lost their lives even.
If as has been reported .... CAMELOT appeared to be moving badly .... hardly surprising after suffering his heels being clipped by MAIN SEQUENCE one of the most dangerous types of interferance there is,  a very painful and highly dangerous experience for both CAMELOT .and ....  the very unsettled MAIN SEQUENCE who over the first two furlongs was giving TED DURCAN a shocking ride, attempting to tank off with him, the only thing that TED  could do to stop him being carted was to attempt to anchor him in behind CAMELOT which is exactly what he did, and in doing this CAMELOT got his heels clipped,  a very sore injury which would most certainly have effected his stride, but further the unsettled state that MAIN SEQUENCE was in, and the interference MAIN SEQUENCE caused, was by then picked up by CAMELOT who then became very unsettled and frightened himself,  as JOSEPH described it  "It 'Lit him up' . So then it was not only MAIN SEQUENCE who was 'Lit Up' it was CAMELOT 'Lit Up' as well. .

ST LEGER 2012
This result can never be allowed to stand
This race has a status to uphold. Not only that, there was a competitor challenging to win the Triple Crown. And due to how this race paned out to be, was the outright winner of this race, and in so doing taking the Triple Crown ..
CAMELOT and JOSEPH O'BRIEN
On viewing this race as a whole the true outcome should be as follows:


Disqualify MAIN SEQUENCE (USA)3 9-0 partner T E DURCAN for seriously dangerous interference ongoing over the first two furlongs burdened upon CAMELOT partner JOSEPH O'BRIEN who not only sustained considerable pain when hit from behind by a traumatised MAIN SEQUENCE but also was 'Lit up" by the traumatised MAIN SEQUENCE for most of this race it can be seen that CAMELOT was closing fast on ENCKE to the line, official distance stated to be three quarters of a length.
Such interferance suffered by CAMELOT to be rated as loosing 20 lengths in this race, without suffering such serious and dangerous interferance CAMELOT and JOSEPH O'BRIEN would have won this as they liked. Horses do feel pain just the same as we do, so how is it that the British horseracing government are running British horseracing like the horses are wooden rocking horses?


GUEST SUPERSTAR RICHARD HUGHES
RICHARD HUGHES is Richard Hannon's  stable jockey he has a book of six rides at Newbury this afternoon for Hannon. Look them out ready for this afternoons C4 live action, direct from Newbury and observe how HUGHES gets on. Three of these races are for two year olds , young racehorses just starting out in their racing careers; with so much to learn still. It is Hannon's Team at home who work each and everyday in preparing these horses ready to compete in their races. It is Hughes skills in the saddle that will guide these beautiful creatures along when competing in their races. All very much depends on the handler riders at home, as to what sort of a ride Hughes gets today on all six of the racehorses he is down to ride. Hughes is very tall, he has to his keep his weight right to ride on the Flat, a major factor in his daily life. Read Richard's book you won't be dissapointed.

A Weight Off My Mind: My Autobiography

Be the first towrite a review.


GOING: GOOD TO FIRM (GoingStick 7.2) (Rail has been moved out from the 7f to the 5f on the round course, meaning races on round course will be 20m longer than advertised). (Sunny intervals)
STALLS: Straight course - Centre; Round course - Inside


Show all racecards for this
Posted by Turfcall at 22:26