FRANKEL ZOOMS INTO CONTENTION FOR A CARTIER RACING AWARD 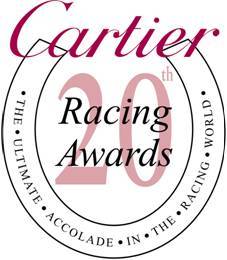 FRANKEL bolstered his towering reputation and stormed into the reckoning for the coveted Cartier Two-Year-Old Colt Award at Newmarket on Saturday, October 16, with a commanding victory over five select rivals in the Group One Dubai Dewhurst Stakes.


The seven-furlong contest was billed as the two-year-old race of the century with fellow unbeaten juveniles Dream Ahead and Saamidd in opposition.

Dual Group One hero Dream Ahead lined in an attempt to complete the Group One Shadwell Middle Park/Dubai Dewhurst double for the first time since Diesis achieved the exceptional feat in 1982. Godolphin’s Saamidd, nicknamed “Pegasus” in trainer Saeed bin Suroor’s yard, was also out to protect a perfect record following his impressive triumph in the Group Two Neptune Investment Management Champagne Stakes at Doncaster in September.

Such races exemplify what the Cartier Racing Awards represent. Frankel delivered a performance par excellence as he enhanced the impression of his 10-length rout of good horses in the Group Two Juddmonte Royal Lodge Stakes the previous month with a comfortable two and a quarter length triumph over Roderic O’Connor. Dream Ahead and Saamidd failed to live up to their billing in fifth and sixth respectively.


Dream Ahead remains top of the current points standings for the Cartier Two-Year-Old Colt Award with 64 points, ahead of dual Group Two winner Approve, who was no match for Saamidd at Doncaster. Frankel’s 48 points place him level with unbeaten Group One Vincent O’Brien National Stakes winner Patchwork and Group One Keene land Phoenix Stakes hero Zoffany.


The Cartier Racing Awards recognise excellence in horseracing and the awards are the sport’s equivalent of the Oscars. Split into eight categories for the year’s top horses, including the particularly coveted Cartier Horse Of The Year, the awards are determined by points earned in Pattern races combined, at the end of the season, with the opinions of a panel of racing journalists, as well as votes from readers of the Racing Post and The Daily Telegraph.


European horseracing’s most prestigious accolades will be presented for the 20th time on November 16, during a glittering ceremony before an invited audience in the ballroom of London’s Dorchester Hotel.


The Cartier Racing Awards were established in 1991 to recognise the achievements of racehorses in Europe. The awards also include the Cartier/Daily Telegraph Award Of Merit for the person or persons who, in the opinion of the special 18-strong Cartier Jury, has/have done most for European racing and/or breeding either over their lifetime or within the past 12 months.


Frankel’s victory was the first leg of a Group One double on Champions’ Day at Newmarket for owner Khalid Abdulla, trainer Henry Cecil and jockey Tom Queally. The trio teamed up for more success in the Emirates Airline Champion Stakes as Twice Over raced to a roundly applauded victory in the 10-furlong contest for the second year in succession.


Having also finished runner-up in 2008 to that year’s outstanding Cartier Three-Year-Old Colt Award winner New Approach, the five-year-old once again displayed his abundant class as he quickened away from multiple Group One winner Vision d’Etat to take his Cartier points tally to 140.

Twice Over, also successful in this season’s Group One Coral-Eclipse Stakes, now sits second to the great mare Goldikova (144 points) in both the Cartier Older Horse category and Cartier Horse Of The Year standings, sharing second spot in the latter with crack miler Canford Cliffs (140).


Dual Oaks winner Snow Fairy missed the Emirates Airline Champion Stakes but remains clear in the Cartier-Three-Year-Old Filly category with 118 points, while Group One Meon Valley Stud Fillies’ Mile heroine Misty For Me stays at the top of an unchanged Cartier Two-Year-Old Filly division with 72 points.


There were no changes to the Cartier Sprinter category, with Starspangledbanner (112) still in the vanguard, while Ascot Gold Cup hero Rite Of Passage (48) also remains at the head of an unchanged Cartier Stayer division.

Harry Herbert, Cartier’s racing consultant, commented today: “Champions’ Day at Newmarket on Saturday certainly appeared to live up to its name with fantastic performances from Frankel and Twice Over.


“Frankel’s decisive victory in the Dubai Dewhurst Stakes means he remains unbeaten and hopefully there will be plenty more to come from him next year.


“Twice Over is a tremendous horse and it is easy to see why he is trainer Henry Cecil’s favourite. The colt is a model of consistency in Group One races and it was a delight to witness a deserved second successive win in the Emirates Airline Champion Stakes.

“As we close in on the season’s climax, our focus turns to assessing the merits of each Cartier Racing Awards contender. With exceptional performers such as Goldikova, Harbinger, Workforce, Canford Cliffs, Midday, Snow Fairy and Frankel to name but a few, it will be fascinating to see how the public and the panel of journalists decide to vote.”

CARTIER AWARDS 2010 LATEST POINTS STANDINGS
(points earned in Pattern Races up to and including October 17, 2010)
Cartier Horse Of The Year

LADY OF THE DESERT 48