John (Mac) McCririck one of the greatest characters that horseracing world wide has ever known.
ALL WEATHER FLAT RACING GOES AHEAD AT LINGFIELD PARK AND SOUTHWELL


VOTE AP McCOY RACING POST TODAY SATURDAY 18.12.2010
TOBY BALDING AP’S MENTOR. “GOOD LUCK AP, I’ll be sitting there on the night trying to get a hundred calls through in 10 minutes. No one deserves it more and no one has worked harder than he has . When he was a conditional jockey with me he was, like all proper racing men , obsessed.”

J P McMANUS OWNER, GOOD LUCK AP, “ He deserves to win because he is a dedicated professional and a very caring person.”

JOHN (Mac) McCRIRICK THE PUNTERS CHAMPION
Mac brings British horseracing into sharp focus and key perspective live on the Morning Line today, as he points out: “The British Horseracing Authority (BHA) and Racing for Change have done a terrific job in bringing A P’s achievements to light as a live contender for Sunday’s Sports Personality Of The Year Awards.”


MAC’S, FURTHER KEY WORDS OF WISDOM ARE THAT : “ THE BRITISH HORSERACING AUTHORITY AND RACING FOR CHANGE MUST LEAVE ‘ THE HEARTBEAT OF THE SPORT ALONE’. NO ONE COULD PUT IT BETTER MAC, WELL DONE. 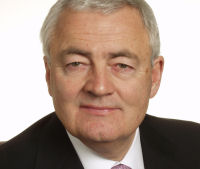 Paul Roy British Horseracing Authority Chairman Bloodhorse Illiterate
ACCORDING TO THE ABOVE REVELATIONS IT IS SUGGESTED THAT AS AN ALTERNATIVE IN THE FOLLOWING DEPARTMENTS,  AND TO BE KEPT WITHIN CHANNEL 4 LIVE BROADCASTING THAT CHANNEL 4 BECOME THE BESPOKE RACING CHANNEL FOR THE FOLLOWING REASONS:

A Bespoke Racing Channel4 to reach out to all people ....
To provide free of charge viewing available to all people ...
To provide a true racing experience for all people who wish to enjoy...
To take part in, and to learn what racing is all about ...
To be able to develop and enjoy their own racing experiences for themselves.
C4 to broaden its balance and scope within the areas of 'Bloodhorse Literacy'  in the right ways.


THAT JOHN (The Greatest Jockey) FRANCOME - AND - JIM (Gentleman Jim) Mc GRATH do act together within the suggested new C4 perspective in the following key areas: Regulation, Disciplinary, Licensing, Career Structures, Pay Structures According to achievements reached, worked for, in all these five named Departments. To get them back on track, to move forward especially on the Bloodhorse Literacy front.

JMC for TURFCALL
Wondering what Alan Titchmarsh would have to say about the super cross country fences that the Cheltenham Racecourse are growing on part of their tracks? Also what would Alan have to say regarding racecourse ‘Turf Management’ to include in part, keeping the take off and landing sides of all chase fences and hurdles refreshed and safe?


THE RACING POST TO-DAY. LORD DERBY FEELING THE PAIN
‘Everything all got rather personal and over the top. I do feel pretty raw at the moment'.
.
The perplexities of the lament that Lord Derby is finding himself in over his Hatchfield Farm project. in today’s Racing Post page 8 and 9 Lee Mottershead talks to Lord Derby, public enemy No 1 in Newmarket due to his Hatchfield Farm development plan, but still insisting he is acting in the best interests of the town.


How would Lord Derby get on if he called in to Alan Titchmarsh’s Garden Allotment .... to threaten its very existence in some way? Or called into the Chelsea Flower Show to threaten same? The core issue here is that Alan Titchmarsh’s achievements as a professional gardener are well known and respected world wide. Not so within British Horseracing's Bloodhorse Literate Handler Riders, who are mainly abused, robbed, badly misunderstood,  the only place for them appears to be locked up in the Tower of London by Bloodhorse Illiterate parties. As Bloodhorse Literate Monty Roberts quite rightly asks, "Who is going to apologise to the species, for all these centuries of abuse, of cruelty, of misunderstanding beyond all belief and beyond all reason  .....? Paul Roy? Nick Coward? And all the rest who take huge financial reward out of British Horseracing each and every year, yet are Bloodhorse Illiterate.

How is it that Newmarket is not renowned world wide for representing ‘The Heartbeat of British Horseracing.’ AND the true horsemen and horsewomen throughout the ages who have picked up the baton and run with it for as long as they could over the centuries, against all adversity ...,.and are still needing to do this today? Bloodhorse Illiteracy is the unbalancing problem.

J Margaret Clarke for Turfcall: AP’S DEDICATION, AND HIS EXPERTIZE CAN BRING TO LIGHT HUGE BENEFITS NOT ONLY FOR MANKIND BUT FOR THE ANIMALS WHO SHARE THIS PLANET WITH US WORLD WIDE, THROUGH HIS ACHIEVEMENTS WITHIN THE SPORT OF HORSERACING, UPSIDES JONJO O’NEILL, TOBY BALDING, MONTY ROBERTS, LARS SEDERHOLM, TINA SEDERHOLM, YOGI BREISNER, JULIE CECIL, DAVID GOODWIN AND FRANK CONLON. TO NAME ONLY A FEW HERE. 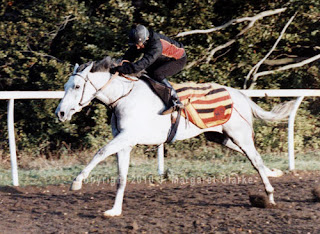 A young apprentice receiving tuition from the Newmarket Racing School on how best to navigate safely the starting stalls ordeal.

It is long overdue that Bloodhorse Literacy take its true place all around the world.
To be properly recognised and rewarded. If AP wins tomorrow night he will have achieved one almighty step in the right direction.
GOOD LUCK AP 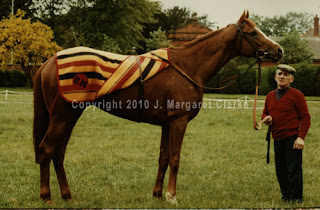 Paddy Masterson a Bloodhorse Literate legend in his own right with the colt Sabotage.
Freemason Lodge 1990's    Sir Michael Stoute "The Daddy Of Them All"

Email ThisBlogThis!Share to TwitterShare to FacebookShare to Pinterest
Labels: Bloodhorse Illiteracy is the problem