TRICKY TIMES AHEAD WITH BLOODHORSE ILLITERACY AT ITS MOST DANGEROUS


COLIN RUSSELL “McGRATH'S NOUS IS NEEDED MORE THAN EVER BEFORE.
RACING FOR CHANGE. Three words which over recent weeks have become among
the most contentious in racing. Acres of newsprint have already been devoted to the two proposed Champions days in 2011. But fear not, this is not another one.


I would, though like to congratulate my former colleague Jim McGrath for voting with his feet and leaving the British Horseracing Authority. He would not be alone in considering that Racing For Change is taking us down the wrong route, and he had the guts to make a high- profile protest. Ironically, with more than 30 years experience in the sport, and with his intimate knowledge of both the Pattern and form books, allied to his marketing skills gained by running the annual charity day at York, he is just the sort of person Racing for Change should have embraced.

Changes in racing are nothing new of course. In my time the sport has altered in a good many ways, but not always for the better. One positive move, illustrated so well in recent days is the transfer of meetings or races when the weather intervenes. Moving last month’s Fighting Fifth from snowbound Newcastle down to Newbury was a triumph for all those involved, but it’s only recently that such a transfer would have been considered. And last weekend, Exeter moved it’s meeting from Friday, when it couldn’t race, to Sunday when after much biting of nails it did take place. In the past, that wouldn’t have been considered, even though it’s been done in Ireland for years .....

*COMMENT FOCUS J. MARGARET CLARKE FOR TURFCALL:
HER MAJESTY THE QUEEN introduces the WORLD to the work of professional horseman MONTY ROBERTS in the early 1980’s. Now 30 years on, one would like to believe that the regulation and disciplinary parties employed by the British Horseracing Authority would take the trouble to be mindful of the clear direction that Monty Roberts work worldwide has achieved, and in particular to alienates all types of cruelty to horses. But no, sadly this is not the case as this following report from David Carr for the Racing Post shows......

“Trainer admits to acting in manner prejudicial to the conduct of horseracing.’

AIDEN O’BRIEN (Bloodhorse Literate) has pleaded guilty to ‘acting in manner prejudicial to the conduct
of horseracing in Great Britain.” Over the CAPE BLANCO controversy and will discover the penalty imposed by the British Horseracing Authority next week.

"However, it was only after the wording of the charge was amended following discussions between the two parties, removing the suggestion that the trainer had acted in a manner prejudicial to the good reputation of British horseracing, that yesterday’s announcement was made


O’Brien also admitted two charges (under BHA force) of encouraging and/or causing his employee Pat Keating to refuse to comply with two instructions given by the stewards at York - an instruction that CAPE BLANCO (who had already been trotted up) trotted up again before the British Horseracing Authority veterinary officer and the senior racecourse veterinary surgeon , and an instruction to attend a stewards’ inquiry in his refusal to allow the horse to be trotted up.


"Keating admitted to being twice in breach of rule (B) 83 regarding his failure to comply with the above instructions.


"The affair stems from O’Brien’s concerns regarding the fitness of CAPE BLANCO after the colt aggravated an old heel injury when winning the Dante, in which he beat the subsequent Derby and Arc winner WORKFORCE.


“We got him back down to the yard and got it iced and poulticed, and the lads got him comfortable and  ready for home,” O’Brien said at the time. “And what happens next? The vets came down and say they want to see the horse trotting – not for his benefit, but for theirs. It’s the most insane thing I ever heard. Why would you want to trot him again on a bruised heal and cause him more pain?”


"When proceedings were first instituted by the British Horseracing Authority back in June, O’Brien was charged under Rule 30.1, which deals with “acting in a manner prejudicial to the conduct and/or good reputation of racing”.


"Yesterday’s wording from the British Horseracing Authority stated that O’Brien admitted to the charge of ‘acting in a manner prejudicial to the conduct of horseracing in Great Britain”.


The panel is now considering what penalty to impose, and drafting its reasons. It is anticipating that a decision will be announced next week.”

Bloodhorse Illiterate cruel British Horseracing Authority Regulation and Disciplinary parties out of touch with reality not fit to regulate horseracing in this country or in any other country. The care and attention that Aiden O’Brien and the professional horseman within his ‘Team’, those at York in May minding and presenting CAPE BLANCO did nothing wrong, but have been punished unjustly through caring for CAPE BLANCO’S injuries sustained in the actual running of the Dante which he won. This colt’s injury needed immediate First Aid treatment action not waffle from bloodhorse illiterate regulation parties. These officials including the Vets should hang their heads in shame.


Horseracing Authority Regulation, Disciplinary and Veterinary parties act in collusion to deliberately mislead the public, to libel and slander skilled professional horsemen’s names, to punish Bloodhorse Literate
achievers unjustly for caring properly for the horses placed  in their care by owners.  END 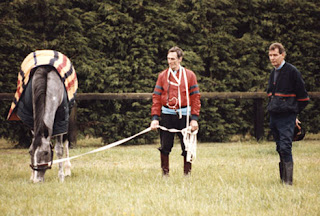 “Petition for rethink over Champions Day.

THE controversy surrounding the Champion Series proposed by Racing for Change looks set to gather momentum with the launch of an on line petition aimed at encouraging the authorities to rethink, if not scrap, the whole project.


Channel 4 pundit Jim McGrath who resigned as chairman of the British Horseracing Authorities Racing Committee over the issue, has helped set up horseracingdeservesbetter.org, which aims to provide a platform for those within the sport and the wider racing public to register opposition.


It is the brainchild of John Livingstone-Learmonth, who in 1994 spearheaded a successful campaign to save the Queen Alexandra Stakes at Royal Ascot, and who shared McGrath’s concerns over the new £3 million British Champions Day at Ascot on October 15 next year.


The website also has the backing of writer Laura Thompson, a well-known commentator on racing politics and contributor to the Racing Post.

Under the RFC plans, the revamping of four weeks’ racing has led to Newmarket loosing Champions day to Ascot and, in its place, hosting Future Champions Day, with the principal juvenile Group 1s-the Middle Park and Dewhurst – on the same card, although that element of the initiative is now subject to re-examination.


As Pattern race changes for next year will not be nailed down until the European Pattern meeting in the second week of January, it is hoped support for the online protest will leave decision makers with no option but to reconsider the project. The website will remain up until at least Christmas.


McGrath explained: “John Livingstone-Learmonth, like me, felt there was a strong feeling of disquiet about all this among real racing fans; it needs focusing in a collective manner and, hopefully it will be taken seriously.


“We have to show RFC it’s not just ‘Disgusted from Tunbridge Wells’ that doesn’t like it, so John came up with the idea of an online campaign and a website, and myself, John and Laura Thompson were all keen to get involved, and we have contributed articles to it.


“There are a number of simple questions, each with a choice of two answers, and if anybody wants to take two minutes to take part, I will be delighted.”

McGrath added “There has been lots of chat in the last few days and people are talking about, for example moving the Middle Park Stakes to another Saturday, but to me that’s just like moving a spoonful of a dog’s breakfast to another bowl.


“If you think about it, they’ve entitled the day with the two-year-old races British Future Champions Day, so how can they turn around and say they are going to move one of them?

“The fact is the whole thing is a mess, and just by moving one race they are only moving a bit of the mess somewhere else.”

Owner- breeder Rhydian Morgan-Jones, a former TBA chairman and BHB director, said yesterday: “I believe the two months between the middle of June and the middle of August, from Royal Ascot to York’s Ebor meeting, would be a wonderful period to promote as the best British of racing that can’t be bettered, however much money you throw at anything.

“I’m not a marketing man and don’t know if RFC looked at this idea, but if they did not I would like to know why not?”

Email ThisBlogThis!Share to TwitterShare to FacebookShare to Pinterest
Labels: http://horseracingdeservesbetter.org/