C4 THE MORNING LINE 7.55am to 8.55am EVERY SATURDAY. LINK UP TODAY WITH HAYDOCK PARK, GOODWOOD, YORK AND THE CURRAGH DON'T MISS IT.

http://www.channel4.com/programmes/channel-4-racing
C4 FOLLOW UP THIS AFTERNOON TO BRING US THE LIVE ACTION DIRECT FROM THESE FOUR TRACKS, WHERE ALL YOUR HOMEWORK CAN BE PUT INTO PRACTICE.
THROUGH THE KEYHOLE THE CLUES ARE THERE ORGANISE YOUR AFTERNOON’S ACTION GET A DECENT NOTE BOOK TO KEEP TRACK OF YOUR VERY OWN HORSERACING PROGRESS, YOU CAN ALSO TAKE IT RACING TO GET JOCKEY'S AUTOGRAPHS  AND TO ADD YOUR PHOTOGRAPHS. 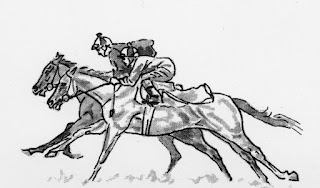 AN  INTERESTING AND ENTERTAINING PROGRAM GUIDE WITH  PREVIEWS , REVIEWS,  KEY CURRENT NEWS, UPDATES, ALL RELEVANT TO THIS AFTERNOONS LIVE ACTION
FROM THESE 4 RACECOURSES.

WINNER:  SOLE POWER  4  9-4  partner  KEAGAN LATHAM minder presenter DAVID  MASON  trainer Edward Lynham for Sabena Power. Won by threequarters of a length at 8-1.
OVERDOSE nick named 'The Budapest Bullett' partnered by  A SUBORICS finish 7th of 12 runners. He arrived in England last Tuesday and settled at Amanda Perrett's Coombeland's Stables. THE BUDAPEST BULLETT has achieved 15 wins out of 16 starts, and carries an aura about him following all his successes,
in his native Hungary, Slovakia, Austria, Italy, and Germany.

JOSEPH AFTER HIS WIN  "Absolutely brilliant, RODERIC O'CONNOR  jumped smartly out of the stalls, and as he seemed happy I let him tip along in front. Everything went super and I never saw another horse until I becoming aware of RICHARD HUGHES and DUBAWI GOLD coming at me inside the last furlong, my horse pulled out a bit more and I think he would have kept finding if he had to."


The whole family were there to join in the excitement.  Aiden for his son, "JOSEPH  knows the horse very well, and rides him in all his work. He's given him a lovely ride and we're  all so grateful to the owners for agreeing to let him ride RODERIC O'CONNOR today, you couldn't even dream of a result like that."

Findlay last night contacted the Racing Post to stress hid desire to collaborate with his fellow winner for a stab at next Saturday's bonus fund, which totals £262,591

JON LEES FOScoopR THE RACING POST TALKS TO SIR ERIC PARKER
“NEITHER BID IS GOOD FOR RACING”INSISTS PARKER.
“ FORMER TOTE BOARD MEMBER SIR ERIC PARKER yesterday warned that not having the Totes’s exclusive pool betting license would hurt racing for a long time and said neither Sir Martin Broughon’s bid nor that of Betfred were attractive propositions.
“Parker a Racehorse Owners’ Association, council member, spent many years trying to secure the Tote for racing and believes the sport’s leaders should have publically opposed its sale because without it racing will miss out on potential windfalls from the development of its pools international.
“We should have come out with a clear statement opposing the sale of the ‘Tote at this stage,
he said: “We are the one racing nation that won’t have pool betting, which is just crazy. The Tote was set up in 1928 to provide an alternative to fixed – odds betting but the whole thing is going to finish up in the hands of a bookmaker or a private equity business. Its very disappointing.
“The government got the legislation through parliament enabling them to take ownership of the Tote on the back of giving the Tote to racing, but due to a variety of excuses, including the EC State aid rules that never got actually tested, they are going to flog it off for next to
nothing  “I always felt the tote should either stay where it is for the time being or be owned by racing.
“It’s the pool betting that’s the key. The international business will inevitably grow and if we can have really high – stakes pools with seriously big winnings it could assist racing, which is
in considerable difficulties.“If you have got private equity and investors looking for returns that isn’t the way it’s going to be. It needs to be owned by racing.”
‘Parker, who described himself as a ‘Backwoodsman’, said racing which originally backed the unsuccessful Tote Foundation bid, should fight harder for the Tote.
“Neither of the deals are at all attractive from racing’s viewpoint and racing should come out and say the government is out of order.
“I would come out with all guns blazing and say we should have a judicial review, but there seems to be an acceptance that the government have made their mind’s up to exit irrespective
of the consequences. "I feel it will be a lost opportunity for the whole industry. We’ll be moaning about it for a long time to come if we loose it.
“I know that it is a seven-year license but seven years is a long time .
“While I am a supporter of the government I am certainly dismayed at the approach they are taking to this.”
END
THE TOTE. J. Margaret Clarke responds for Turfcall
GOVERNMENT BLOOD MONEY.
MONEY SNATCHED BY GOVERNMENTS off the backs of others skill and expertise. In this case snatched off all those who have achieved BLOODHORSE LITERACY over the last 83 years. This sharp practice has to be stopped, and stopped now for once and for all time.
‘THE TOTE’ belongs by absolute right to all those who have achieved ‘BLOODHORSE LITERACY’, because these are the people the government have been ripping off big time over the last 83 years. It could be said that the Tote has existed and has been bought over the last 83 years since 1928 time after time after time, by horseman who have achieved BLOODHORSE LITERACY.


DEMAND A JUDICIAL REVIEW
All licensed trainers to operate in tick over mode, no horses to go to any racecourses to run, for as long as it takes.