http://www.channel4.com/sport/microsites/H/horse_racing/
BE SURE TO RECORD THE ASCOT QIPCO RACES THIS AFTERNOON 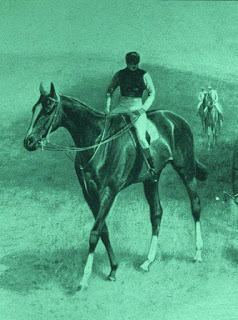 ST BLAISE 1880
Sire HERMIT Dam FUSEE
Won the Epsom Derby in 1883 partner CHARLES WOOD who took skilful and courageous advantage of an opening rounding Tattenham Corner an advantage that won them this race by a neck from HIGHLAND CHIEF
Trained by John Porter and owned by HRH The Prince of Wales
LIVE ON C4 and BBC 1 - BBC2  HEARTS WILL BE RACING TODAY QIPCO CHAMPIONS DAY ASCOT FLAT TURF, JUMPING CARD FROM CHELTENHAM, CATTERICK FLAT TURF and KELSO 3.25 CHASE
THROUGH THE KEYHOLE THE CLUES ARE THERE, AN INTERESTING AND ENTERTAINING PROGRAM GUIDE WITH PREVIEWS, REVIEWS, KEY CURRENT NEWS, UPDATES, ALL RELEVENT TO THIS AFTERNOONS LIVE ACTION FROM THESE TRACKS
RACING POST WEEK MONDAY OCTOBER 10th - SUNDAY OCTOBER 16th 2011
Please us this link for update news throughout this week.
http://www.blogger.com/post-create.g?blogID=6426904324281265779


DAVID CARR welcomes the chance for a celebration at Ascot today
“AT LAST we have a few hours in which to enjoy a break from the depressing tasks of counting the penny’s and counting the whip strokes.

“Instead we have a chance to count our blessings, to forget the financial woes of owners hit by sliding  prize- money and jockeys hit by the new penalties for over use of the stick that have dominated recent racing headlines.
“For today at least all we need to count is how many lengths he pulls clear and how many pounds he adds to that stratospheric rating.  He is FRANKEL – the horse who might just do for the gloomy second decade of the 21st century what SEABISCUIT did for Depression-hit America in the 1930’s if he earns Sir Henry Cecil an earlier audience with the Queen, who presents the prize this afternoon and is due to knight the trainer this autumn.

“Cecil’s force of nature is the undoubted star of the new Qipco Champions day, even in a cast list that includes no fewer than six of the top nine active horses in the official world rankings. The wonder colt had no trouble upstaging bigger names on Queen Elizabeth 11 Stakes day at Ascot last season when he took the breath away with an awesome ten-length victory in the Royal Lodge Stakes which overshadowed POET’S VOICE and the rest in the main feature. Nothing hass happened since to shake the conviction of those who were present that they has seen something special; indeedsomething special enough to outrun a train on the gallops if reports are to be believed. On the course the highlights have been a six-length demolition of his Classic rivals in the 2,000 Guineas at Newmarket and a tour de force at Goodwood in the Stakes. If he was less impressive in the St James’s Palace Stakes at Ascot in between it appeared to be due to having been asked to chase down a strong early pace we will have conclusive proof should the same thing happen today as Ascot has inched into the 21st century by introducing high-tech electronic sectional timing for this afternoon’s big meeting.

SHOULD  FRANKEL again do something extraordinary he will be grabbing the limelight from what is supposed to be the main act, the Qipco Champion Stakes (3.35)  The race has been moved to Ascot specifically to be the highlight of the richest card ever staged in Britain. FRANKELS stablemate TWICE OVER won the last two runnings at Newmarket but neither year did he meet anything quite like today’s opposition.


“SO YOU THINK, a champion in Australia, has created such a favourable impression in Europe that his fourth place in the Prix de L’Arc de Triomphe at Longchamp was widely seen as a disappointment. Aiden O’Brien’s imposing star is reunited with RYAN MOORE and is set to go off a warm favourite today.


“NATHANIEL won the 1m4f King George v1 and Queen Elizabeth here in the summer and his trainer John Gosden is confident that this two-furlong  shorter trip will be no problem –although he is less sanguine about today’s outside draw.


“TWICE OVER’S stablemate MIDDAY is a six time Group 1 winner and will be partnered by stable jockey Queally- although he was also on board the mare when she was beaten by TWICE OVER in the Juddmonte International at York in August. All this plus fast-improving sprinter DEACON BLUES, gutsy stayer OPINION POLL and an apprentice race which will earn one claimer the chance of winning a working holiday in the US. What was that about the whip again?
Tote Scoop6 Betting and Results
Please use this link for today's totescoop6 races
http://www.totesport.com/portal?action=GoType&pool_type_id=USC6&ev_type_id=403

LESLEY GRAHAM HOSTESS BROADCASTER PRESENTER Bloodhorse Illiterate
Lesley introduces guest star EVAN WILLIAMS who has two runners this afternoon at Cheltenham BUCK MULLIGAN in the 2.40 Handicap Chase and LANCETTO in the 4.50 Novices Chase both to be partnered by PAUL MOLONEY
http://en.wikipedia.org/wiki/Channel_4_Racing

ALICE (Saucy Minx) PLUNKETT BLOODHORSE LITERATE in her own
right. The only lady rider to have ridden around Badminton and the Grand National. http://www.femalefirst.co.uk/alice-plunkett/
TANYA (Tipbits) STEVENSON brings us her BETTING BULLETIN’S
TANYA form specialist broadcaster up to the minute on line betting stats, market movers, introducing us to SIMON CLAISSE Clerk of the Course at Cheltenham update on the going, and also to JULIE WILLIAMS in the betting ring.

http://www.amazon.co.uk/s/?ie=UTF8&keywords=john+francome+autobiography&tag=googhydr-21&index=stripbooks&hvadid=4795221559&ref=pd_sl_90p7j5pdbw_b
PAUSE FOR THOUGHT
HORSERACING A UNIQUE AND REMARKABLE SPORT
THE FIRST RUNNING OF QIPCO CHAMPIONS DAY AT ASCOT
AN ADVENTURE INTO THE FUTURE. FIRST RACE 1.50 LAST RACE 4.45
A SPORT BADLY LET DOWN BY SUCCESSIVE BRITISH GOVERNMENTS
Posted by Turfcall at 23:55