CHANNEL 4 THE MORNING LINE LINK UP WITH DONCASTER NEWBURY AND AINTREE SATURDAY OCTOBER 22nd 7.55am to 8.55am EVERY SATURDAY

http://www.channel4.com/sport/microsites/H/horse_racing/
LIVE ON C4 HEARTS WILL BE RACING TODAY AT DONCASTER, NEWBURY AND FROM AINTREE THE 3.30 CHASE 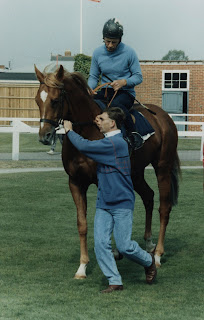 THROUGH THE KEYHOLE THE CLUES ARE THERE, AN INTERESTING AND ENTERTAINING PROGRAM GUIDE WITH PREVIEWS, REVIEWS, KEY CURRENT NEWS, UPDATES, ALL RELEVENT TO THIS AFTERNOONS LIVE ACTION FROM THESE THREE TURF TRACKS
http://turfcall2-racingpost.blogspot.com/2011/10/racing-post-monday-october-17th-2011.html
GRAHAM DENCH TODAY'S BIG TALKING POINT
HIT OR MYTH? QUANDARY FOR PUNTERS OVER TWO YEAR OLD COLT CAMELOT ....
BEWARE TAKING A SHORT PRICE ABOUT THE RACING POST TROPHY FAVOURITE
“IF THE BETTING is to be believed Aidan O’Brien’s CAMELOT is more or less past the post in the Racing Post Trophy – he is as short as evens for this afternoon’s contest the 3.00pm (RPT)  at Doncaster and no bigger than 12-1 clear favourite for next years Investec Derby. Yet it requires a huge leap of faith to go in at cramped odds now. Available at 5-2 on Tuesday, when the stable’s Royal Lodge winner DADDY LONG LEGS was still in the equation, he is a crazy price for a once-raced colt whose debut win in a five-runner maiden at Leopardstown has been let down not only by runner-up  ALL APPROVED, who was beaten for a sixth successive time at Bellewstown on his last start and boasts a Racing Post Rating of just 76, but also by third-placed FORT SAM HOUSTON, who has since been beaten at Killarney and Listowel.

“ CAMELOT could only beat what was put before him and there is no denying he won readily after coming from last to first, but he still has a great deal to prove. What is more, while many will take encouragement from O’Brien’s five wins in the last 13 runnings of today’s Group 1, it has not always been the Ballydoyle No 1 who has done best in the Racing Post Trophy.  Short  - priced favourites who have been included EAGLE MOUNTAIN,  fourth at 8-11 in 2006 ....

SEPTIMUS, third at 5-6 the year before that and the eminently forgettable CASTLE GANDOLFO, beaten by his brilliant stablemate HIGH CHAPARRAL when  8-13 in 2001. In fact, CAMELOT’S stablemate LEARN, although more exposed, clearly has better form and so for that matter do Listed winner FENCING, easy Newmarket maiden winner ENCKE, Somerville Tattersall third  ZIP TOP and Solario winner  TELWAR, who is the only Group winner in the field yet a complete rag in the betting.  Still fancy taking short odds?

“While the Racing Post Trophy pretty much represents the last knockings of the domestic turf season, the unexpected return of duel Queen Mother Champion Chase winner MASTER MINDED in Aintree’s Old Roan Chase will for many fans herald the start of the jumps season proper. Sadly MASTER MINDED appears to have frightened off most of the opposition in this limited handicap, run this year in celebration of the race’s three - time winner MONET’S GARDEN, but ALBERTA’S RUN, who chased MASTER MINDED home at a respectful nine lengths in the Melling Chase in April, will be no pushover in receipt of 10lb.
“Back on the Flat, many punters will be drawn to Newbury’s Totescoop6 HBLB Handicap, which has attracted just the sort of field the Levy Board were hoping for when they threw £30,000 at it.
“Luca Cumani has the first two in the betting in KIRTHILL and NAQSHABBAN, but they bet 11-2 the 16- runner field and this is truly a race in which a good case can be made for a dozen or more. It is one of two new £50,000 handicaps at Newbury – the other is a hurdle on New Year’s Eve – and there will hopefully be more such initiatives in 2012 on Saturdays that are thought likely to benefit particularly from a high value and higher quality handicap." END

There were 9 winners of the Scoop6 last Saturday who won £54,599 each. They will be playing for the Bonus fund of £556,699 this Saturday. They will need to pick the winner of race 1, the 2.00 at Doncaster. If they fail, any winners of this week’s Scoop6 will play for an even larger bonus fund next week.
C4 HISTORY IN THE MAKING THE NEW LIVE MORNING LINE
HORSERACING TEAM TODAY ARE:
NICK (Lord Snooty) LUCK Host, presenter broadcaster
THE WHIP ISSUE discussed throughout the first half of today’s Morning Line.  The concern this has, and is causing, and rightly so,  needs now to be sorted out properly, not just seen to be rectified by the poor standards of the BHA regulation people.
Bloodhorse Illiterate
http://twitter.com/#!/nickluck/status/72761794954924032
http://www.racehorseowners.net/en/news/horseracing-tweets.cfm
GUEST STAR KEVIN DARLEY BLOODHORSE LITERATE
KEVIN has spent his lifetime gifting his talents to horseracing at the highest level attempting at present to get some squeak of response from the bloodhorse illiterate regulators. (BHA)
http://en.wikipedia.org/wiki/Kevin_Darley
http://www.jockeysroom.com/itm00155.htm
http://www.sportinglife.com/racing/news/story_get.cgi?STORY_NAME=racing/07/11/10/RACING_Darley.html

SIMON has continued to cover many important events including the Cheltenham Festival, 1,000 and 2,000 Guineas, St Leger, King George VI Chase and, from 2007, Glorious Goodwood. He also called the Irish Derby once (in 2000 when Sinndar triumphed as RTE used the BBC's Jim McGrath to call the race in the absence of Tony O'Hehir), as well as the 2001 Prix de l'Arc de Triomphe when the TV rights briefly transferred from the BBC to Channel 4. Bloodhorse illiterate
http://en.wikipedia.org/wiki/Simon_Holt_(commentator)
PAUSE FOR THOUGHT

J MARGARET CLARKE TURFCALL
HORSERACING REGULATION
CLOSE  on a year ago now the British Horseracing Authority (BHA Regulation) made the decision that a whip review was needed. Following which we are led to believe that the Australian Jamie Stier and veterinary Tim Morris were chosen to lead this review.

One would have thought the very first thing that this BHA whip team needed to do was to set out a document with the title ‘WHIP TACTICS’
1.       ACCEPTABLE BLOODHORSE LITERATE WHIP TACTICS
2.      UNACCEPTIBLE  BLOODHORSE ILLITERATE WHIP TACTICS
TODAY after all this time and a 78 page BHA Whip Review Document published just weeks ago, coming into effect on Monday October 10th  and without any trial period, has proved a shocking and drastic disaster on all fronts, even contaminating the French rider Christophe Soumillon with horrendous punishment. This whole BHA regulation issue handled by a team of unqualified Bloodhorse Illiterate BHA  team workers.

<> <>
HORSERACING A UNIQUE AND REMARKABLE SPORT
Posted by Turfcall at 12:02