http://www.channel4.com/programmes/channel-4-racing
LIVE ON C4 HEARTS WILL BE RACING TODAY AT
ASCOT (Jumps Turf)  HAYDOCK PARK (Jumps Turf)
THROUGH THE KEYHOLE THE CLUES ARE THERE, AN INTERESTING AND ENTERTAINING PROGRAM GUIDE WITH PREVIEWS, REVIEWS, KEY CURRENT NEWS, UPDATES, ALL RELEVENT TO THIS AFTERNOONS C4 LIVE ACTION FROM THESE TWO TRACKS .

C4 MORNING LINE BRING US A WINDOW ON THE WORLD OF HORSERACING EVERY SATURDAY. FOLLOWING UP IN THE AFTERNOON TO BRING THE LIVE ACTION DIRECT FROM ASCOT AND HAYDOCK PARK. PROVIDING A VIVID INTRODUCTION TO BLOODHORSE LITERACY
BOTH IN THEORY AND IN PRACTICE.

http://www.scoop6.co.uk/scoop6-races.htm
Race 1 : 1.55 Haydock
Race 2 : 2.30 Haydock
Race 3 : 3.00 Lingfield
Race 4 : 3.05 Haydock
Race 5 : 3.20
Race 6 : 3.40 Haydock
There was no winner of the Scoop6 last Saturday. That is great news for you as the Win fund will start off this Saturday with £337,848 rolled over from last week and there will be a guaranteed £750,000 in the bonus fund if the bet is won on Saturday (19.11.2011}
Therefore a single winner of the Win and Bonus Funds could scoop around £1.25 Million!
This weekend’s totescoop6 contains four races from Haydock’s valuable jumps card with the highlight undoubtedly the Betfair Chase (3.05) in which reigning Gold Cup winner LONG RUN  is currently a shade of odds-on to make a winning reappearance. The other Scoop6 legs see a single race from Lingfield as well as a competitive handicap chase from . Remember to return to Scoop6.co.uk today for live updates as the Scoop6 runs and a chat with other Scoop6 players.
C4 MORNING LINE TEAM, GUEST STARS TODAY :
NICK (Lord Snooty) LUCK Host presenter  broadcaster brings news and the promise of an exciting days racing.
GUEST STAR PAUL NICHOLLS Champion Licensed Trainer Bloodhorse Literate.
Paul has a busy day's racing ahead, with a double handful of runners, take note of how they get on. Have a look at his website you won't be dissapointed.
http://www.paulnichollsracing.com/
GUEST STAR  TONY CALVIN BETFAIR
Tony Calvin has been at Betfair since June 2002, and is currently the senior press officer in the Communications team. Calvin has been on the other side of the journalist fence too, having worked for the Racing Post between 1987 and 1999, and currently also writes for weekly racing publications, Weekender and Raceform Update.
http://betting.betfair.com/authors/tony_calvin/index.html


ALICE (Alice in Wonderland) PLUNKETT- Bloodhorse Literate in her own right, takes us through the runners and riders challenging for this afternoon’s 3.05 Feature Race The Betfair Chase at Haydock Park.  http://www.thesun.co.uk/sol/homepage/woman/health/health/3457122/Channel-4-Racings-Alice-Plunkett-jumps-to-cancer-challenge-at-Cheltenham.htmlhttp://www.jscsport.co.uk/alice-plunkett.php 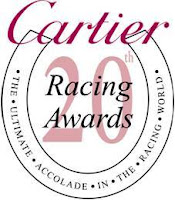 
TODAY’S BIG TALKING POINT
“RODNEY MASTERS welcomes the reappearance of LONG RUN in a race to savour.
“The young king returns with jumping world at his feet ….
“BEFORE we had a chance to clear our throats to voice a view, one talking point theorising about Cheltenham Gold Cup winner LONG RUN’S level of match fitness for his return in today’s £200,000 Betfair Chase was emphatically thrown back in our faces by a posse of his stablemates.
“Of Nicky Henderson’s five winners spread across Ascot and Haydock yesterday, four were making their first appearance of the season. Up until recently, Henderson’s horses had been needing their initial run. Then, little more than three weeks ago, rain arrived in sufficient quantity across west Berkshire for his team to work for the first time this winter on his privately owned superb grass gallops alongside the Faringdon Road. That was instrumental in honing race fitness.
“Three of LONG RUN’S rivals in today’s showcase race have had the benefit of a lung-opener, with WEIRD AL and TIME FOR RUPERT  finishing first and second  in the Charlie Hall Chase last month, with PURE FAITH  - who can be backed at 100-1 – was second to ALBERTAS RUN  at Aintree four weeks ago.
“Perhaps oddly, however, the two horses who follow LONG RUN in the market are also without a race run – DIAMOND HARRY who missed Wetherby due to lameness and so has not run since winning the Hennessy last year, and the living legend that is KAUTO STAR ….
PAUSE FOR THOUGHT

Picking dandelions for the horses .What sort of a world will we be leaving these little ones to live in?


WHEN ARE THE BRITISH HORSERACING AUTHORITY TO PRODUCE THEIR BLOODHORSE LITERATE WHIP REVIEW?
HORSERACING A UNIQUE AND REMARKABLE SPORT
Posted by Turfcall at 05:07