http://www.channel4.com/sport/microsites/H/horse_racing/
THE CURTAIN COMES DOWN ON THE 2011 FLAT SEASON IN BRITAIN THIS AFTERNOON
LIVE ON C4 HEARTS WILL BE RACING TODAY AT DONCASTER  (Flat Turf), WINCANTON (Jumps Turf)  SANDOWN PARK
THROUGH THE KEYHOLE THE CLUES ARE THERE, AN INTERESTING AND ENTERTAINING PROGRAM GUIDE WITH PREVIEWS, REVIEWS, KEY CURRENT NEWS, UPDATES, ALL RELEVENT TO THIS AFTERNOONS LIVE ACTION FROM THESE THREE TRACKS.


Please use this link for this weeks horseracing news


LEE MOTTERSHEAD says it could be a night to remember
MAGNIFICENT END TO A MARVELLOUS SEASON OF THRILLS
“THIS TIME next week our world will be a very different place. All the
marvellous moments of these past few months, will not be forgotten, will be
pushed to one side as minds focus on chasers, on hurdlers and the first great Saturday of the jumps season.
"Winter’s opening showpiece, the Paddy Power Gold Cup, will have our
attention as we succumb to the irresistible thrall of watching drama unfold at the foot of Cleeve Hill.
“But as one iconic venue prepares it’s self for action another is ready for racing
and razzmatazz. Postpone thoughts of Cheltenham and concentrate on a racecourse some 4,000 miles away as Churchill Downs, America’s celebrated
twin spires track, tonight welcomes European superstars GOLDIKOVA and SO YOU THINK for a series of Breeders’ Cup battles that bring down the curtain on an exceptional season Flat season.

GUEST STAR MARTIN HARLEY FLAT RACE APPRENTICE CHAMPION 2011
(Student handler rider) LEARNING TO BECOME BLOODHORSE LITERATE
Early Days
In common with many of Ireland’s top riders, Martin Harley is a graduate of the pony racing circuit. A native of Co. Donegal, Harley was apprenticed to Jim Bolger and took his first ride on the racecourse when he was 17-years-old, finishing second in a handicap at Navan on the Bolger-trained Conclave on June 15th 2007. He did not have to wait long to get off the mark, riding the Niall Moran-trained Proud Ruler to success in a handicap at Down Royal on June 24th on just his fifth racecourse ride. Two days later, Harley followed up on the same horse in a similar event at Sligo. In early-August, he continued the fast start to his career, gaining two wins in three days on the Sean Treacy-trained Dane Blue and winning on the Michael Connell-trained Solar Sail at Tralee a fortnight later. Such a fast start very much brought him to the attention of the wider racing public, resulting in him being given a quantity of outside rides that would be the envy of any apprentice. He rewarded that support with a solid finish to the season, riding winners on the Ado McGuinness-trained Distant Piper and the Liam Roche-trained Mr Smiley, giving him a total of seven winners for his first term as an apprentice rider.
http://www.thepja.co.uk/champ_conditional_apprentice.aspx
http://www.goracing.ie/HRI/Whats-On/About-Horse-Racing/Profiles/Jockey-Profiles/Martin-Harley/

Commentator Broadcaster. Bloodhorse illiterate
Simon has continued to cover many important events including the Cheltenham Festival, 1,000 and 2,000 Guineas, St Leger, King George VI Chase and, from 2007, Glorious Goodwood. He also called the Irish Derby once (in 2000 when Sinndar triumphed as RTE used the BBC's Jim McGrath to call the race in the absence of Tony O'Hehir), as well as the 2001 Prix de l'Arc de Triomphe when the TV rights briefly transferred from the BBC to Channel 4. http://en.wikipedia.org/wiki/Simon_Holt_(commentator)


TOM (The Punters Champion) LEE out on the track at Doncaster this morning, checking out turf condition’s with Clerk of the Course  JOHN PULLIN and bringing us up to the minute on line betting stats, market movers on the gambling front. Going good to soft out on track Town Moor.
Email Tom: racing@channel4.com
http://tips.betting-directory.com/about-tom-lee/ 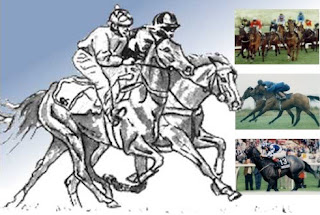 THE ALL- PARTY GOVERNMENT MP'S DUE TO MEET UP TO TALK ABOUT THE PRESENT CRISIS IN  HORSERACING WAS CANCELLED THIS WEEK.


THE BRITISH HORSERACING REGULATION AUTHORITY (BHA) HAVE OVER THE LAST MONTH OR SO PUBLISHED TWO DOCUMENTS AS FOLLOWS:
1. BHA WHIP REVIEW
2. BHA GRAND NATIONAL REVIEW
BOTH these BHA document perspectives are geared only 'in theory'.
Where is copy of either of these documents geared 'in practice alive' to enable direction for all those who have achieved bloodhorse literacy,  all those who go out each and every day to work at the dangerous sharp end of British horseracing where all the action takes place? All those who's work in practice keeps horseracing alive and thriving every day of the week, every month of the year? For others to enjoy, but at what cost to their own life and times? There isn't even a working foundation career structure.

All the people who work within the BHA and within government have some very serious questions to answer as to the unbalanced state of British racing  as to how racing is being funded, clearly a very one sided wage structure between those who work in theory and those who work in practice. Therein lies the badly negligent bloodhorse illiterate government upsides the badly negligent bloodhorse illiterate BHA. There appears a surplas of money available to pay Tim Morris and Jamie Stier both bloodhorse illiterate. Put on to carry out key work relating to safety issues facing bloodhorse literate achievers in practice. It is this side of the argument that is being ignored.

HORSERACING A UNIQUE AND REMARKABLE SPORT
Posted by Turfcall at 19:43

Email ThisBlogThis!Share to TwitterShare to FacebookShare to Pinterest
Labels: Morning Line Saturday November 5th 2011 Curtain comes down as a Flat season to remember for so many wonderful reasons