CH4 SATURDAY DECEMBER 1st THE MORNING LINE 2012. JOIN UP 7.55am to 8.55am EVERY SATURDAY WITH NEWBURY HENNESSY GOLD CUP DAY THREE AND NEWCASTLE TODAY


RACING POST JOIN UP AND JOIN IN  SOME OF THIS WEEKS NEWS
WEEK MONDAY MOVEMBER 19th TO SUNDAY DECEMBER 2nd 2012
http://turfcall2-racingpost.blogspot.co.uk/2012/11/saturday-december-1st-join-up-racing.html


"Pricewise heads our top tipping team as favourite  BOBS WORTH  bids to deliver in the big race and an all-time great returns BIG BUCK'S is back. YES, YES, YES AND HOW

3.10 NEWBURY HENNESSY HANDICAP FIELD 2012
WITH AT A GUESS 20 BIG CHASE FENCES TO BE TACKLED


This race is going to take some winning, all depends on how it pans out to be in the running, make no mistake about that. There are 19 runners taking part, on going stated to be Good to Soft, with the overnight covers on last night.
Top weight TIDAL BAY 11.11-12 RUBY WALSH
Bottom weight ALFIE SPINNER 7 10-0 MARK QUINLAN(3)

Today's great reads ....
"DAVID PIPE  The inside track on his runners today page 14.
"ALASTAIR DOWN On a race that never disappoints.page 15
"DAVID ASHFORTH Hennessy heroes page 21

All the work at home that goes into preparing these racehorses
for competition on the racetracks around the world, a massive work of art
that few ever come to realise or understand.

Charlie himself has grown a Movember Moustache and whilst he was attempting
to take the C4 Guest Test,  Rosie was shaving it off.


Derek (Host Presenter) ( Bloodhorse Literate)  Thompson
Tommo brings us news that Racing is on at Newcastle this afternoon
C4 bring us 2.20. 3.25

Mac has his winter hat on and what a Super Saturday Racing Hat it is, fantastic x


MUSINGS FROM A RETIRED RACING ENTHUSIAST


"Hennessy offers  heroes of all shapes and sizes


"I'M THINKING of wearing stockings. Another pair came flying out of the top-flat window on Thursday  and it seems a shame to waste them. I don't think anyone would notice. After all, in the coffee shop Emily has been serving lattes wearing a pair of antlers.
"Mercifully, Christmas comes but once a year and it's just the same with the Hennessy Gold Cup, although the Hennessy tends  to cost more. I don't think I've ever backed the winner, until this year (see bellow) If you're thinking of going to Newbury go early -  it gives you more time to be in the traffic jams.
"It's a race with a tremendous, evocative history. Like Ingemar Erlandsson, the Swedish football international, the  Hennessy was born on November 16, 1957. MANDARIN won the first running of the race, at , and after it moved to Newbury he won it again. In the meantime John Lawrence,  later Lord Oaksey,  had won it on TAXIDERMIST, who stuffed all the others (I know, I just couldn't stop myself).
"Lord Oaksey had a strong, emotional  connection with the race. You probably know about CARRUTHERS, last year's winner, bred by Lord Oaksey and trained by his son-in-law Mark Bradstock, but you may not know about GHOFAR, who won the Hennessy in 1989.


"GHOFAR was half-owned by Sir Hugh Dundas, who was Lord Oaksey brother in law  and one of the most remarkable men I have ever met. You need strong nerves to keep coming back for more after yet another bone-breaking fall but you need even stronger ones when you are only 19, already flying a Spitfire and, every time you take off, German Messerschmitts are waiting to kill you. For Battle of Britain pilots, told me, it wasn't a matter of not being frightened - everyone experienced  fear - it was a question of how to face it down. Shortly after his 20th  birthday 's plane was shot down. He was lucky - he baled out and survived. Three months later his elder brother John, also a pilot  was killed.

"In May 1941 was shot down and crash landed in . During one fortnight that summer ' s squadron lost more than half its pilots. At the end of the year, aged 21, became squadron leader. A year later his plane was shot down again and crash-landed in . survived and was promoted to acting wing commander, aged 22. In 1944, his plane damaged by flak, made another forced landing and, aged 24, became the youngest ever group captain. He led from the front, brave beyond belief.

"If his wife, Lord Oaksey's sister, hadn't prodded into telling his remarkable tale. I doubt if I would have heard it.  gave me a copy of  Flying Start, his wartime story, published the year before GHOFAR victory. It is well worth reading.

"There had been heroics of a different kind in 1964 and 1965 when ARKLE not only won the Hennessy, but won it carrying 12st 7lb. He only failed to repeat the feat in 1966 because he couldn't quite give 35lb to STALBRIDGE COLONIST who, a few months later, after ARKLE had retired, was narrowly beaten in the Cheltenham Gold Cup. TIDAL BAY fans might like to ponder the fact that the winner RONDETTO was the last 11-year-old Hennessy winner.

"Older horses don't have a great record in the race, unlike jockey PAUL NICHOLLS. It is quite difficult to look at the names of the 1986 and 1987 winners BROADHEATH and PLAYSCHOOL without noticing, next to NICHOLLS' name, 10st 5lb and 10st 8lb. Oh well I know the feeling.


"And so it goes on, because the Hennessy is a race that brings back memories. On to        NICHOLLS again, as a trainer of three Hennessy winners, including DENMANS stirring triumphs in 2007 and 2009."

"Today is also the day after the end of Movember and it's heartening that so many racing people have taken part to raise awareness of men's cancers and  funds for Prostate Cancer . The Racing Post's own team , with trainers Charlie Longsdon and Roger Curtis to the fore,  stand 197th  in the list of  31,060 teams, having raised approaching £4,000.
"There 's still time to donate via movember.com and everyone's welcome to The Malt Shovel in from 6pm today for a Movember celebration. will be there to shave off moustaches  and I'll be signing copies of my book Racing Crazy to raise some money. Be there or be square."

MOVEMBER CELEBRATION
ALICE  (In Wonderland ) (Saucy Minx ) PLUNKET WILL BE THERE
TO SHAVE OFF MOUSTACHES
Put your stockings on and get down to the Malt Shovel in from 6pm this evening.
http://www.themaltshovel.com/ 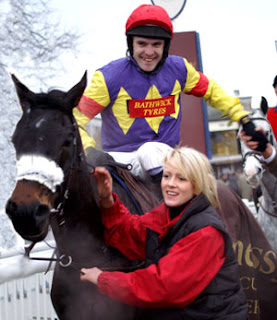 
EQUUS ZONE
CH4am MORNING LINE 7.55am BRING US A WINDOW
INTO

racing PLUS - TODAY The weekend cards in time order
http://racingplus.co.uk/


Get that engine running


"Can we leave it to Mr Saturday?


GOING: SOFT (Good to soft in places on Chase course; GoingStick: Hurdle 4.6, Chase 5.4) (As a precaution we will cover all take-offs and landings). (Sunny intervals)

MEETING INFO COURSE MAPSTATISTICSFAVOURITESSIGNPOSTSSTANDARD TIMESPRINT-OUTS
GOING: SOFT (Heavy in places (frozen in odd places); GoingStick 5.9) INSPECTION 8am Saturday (Bends moved to provide as much fresh ground as possible; 3m bend and bend into straight divided to ensure best ground possible; all hurdle sites have been moved). (Sunny)
Show all racecards for this meeting on one page