THE HORSES COME FIRST NOT THE BHA GOVERNMENT


Reg Hollinshead: gave a great many people a lot of pleasure.
Pic: R Hollinshead himself

“REG HOLLINSHEAD was such a permanent and much loved fixture on the racing scene that he has been allowed to carry on training posthumously, as horses have been running in his name since he died on Monday.

For most of Hollinshead’s training life he appeared on racecards and in the results simply as R Hollinshead, , Staffs, because in the days of his prime, trainers, including their first names, were far more of a mystery than they are today. When Remainder Man won the 1978 Free Handicap at , off  7st 10lb, ridden by M Wigham (5), it was R Hollinshead, Upper Longdon, Staffs who trained him, en route to finishing runner-up to in the 2,000 , en route to finishing third in the .

“At that time it seemed strange to see a Hollinshead horse in a Classic, because those weren’t the sort of horses he had in his unfashionable yard until the white-blazed chestnut came along. Perhaps Remainder Man would have won the Derby, at 40-1, if the ground had been softer, or perhaps Willie Shoemaker would have won on Hawaiian Sound, at 25-1, if he’d cut off Shirley Heights’ route up the rail.

“As it was, J Dunlop, Arundel, Sussex was the winning trainer, with C Brittain, Newmarket, Suffolk training the sixth horse home, Julio Mariner, who went on to win the St Leger, memorably for me because I’d backed him anti-post at 66-1. I think I backed for the too, but it’s a long time ago and I might be mistaken. I don’t seem to have the money.

“Those were the days, although not for watching in betting shops, because you couldn’t, nor for studying replays, because that was a rare privilege too. Most races weren’t televised and racefans knew little about most trainers. On the other hand, there were some cracking advertisements, although not for gambling. I liked the one aimed at jump trainers – “High o’er the fence leaps Sunny Jim, Force is the food that raises him. “I don’t know if any trainers took the hint but I used to make a point of  buying Force, for fear that the cereal, and its poetry, would go out of business. Sadly it has, five months ago. Force, born 1901, died 2012, much missed. If only they’d advertised it, or trainers had used it. If they didn’t feed their horses with it, they could have fed themselves. When Force was at its peak, there was Horlicks to consider too. An advert used to claim “Horlicks guards against starvation”. It conjured up images of a trainer’s wife waking up to find her husband dead. “I blame myself,” she’d say. “He hadn’t eaten a thing since supper.”

“I DON’T know about you (you probably hadn’t been born in 1978) but the year of Remainder Man was a strange one for me. It was the year when a teenager called Richard from a deprived part of arrived to be introduced to a better way of life in Buckinghamshire. In return, he introduced us to a new kind of music. He picked up my sister’s guitar, swung it around his head, then banged it against the wall.

“On my way to VJ Racing, the local betting shop, I used to chase Richard down the Road, shouting: “Come here you little bastard,” while he chased children trying to flee on bicycles.

“Richard’s not there anymore, but VJ Racing has survived, although Vic, who ran it, died 11 years ago at the second tee of a local golf course. I expect I’d paid for his clubs and his club membership. I rather hope Richard never picked up a golf club.

“But I degress. Remainder Man was Hollinshead’s best horse but during the ill-fated experiment with jumps racing on all-weather tracks, Hollinshead made hay with Suluk, who boasted some extraordinary statistics.

“Suluk wasn’t a great horse and the races were humble ones, as indicated by the fact that none were worth even £2,000 to the winner. Yet it was still, in its way, a great feat and, in his own quiet way, year after year, Reg Hollinshead carried on giving a great many people a lot of pleasure and setting others on their way to success. We’ll all miss R Hollinshead, , Staffs.”

An Equus Zone Epitaph May 2013
David threads his way through the life and times of  R Hollinshead, , Staffs.
His career and the horseracing adventure of his lifetime journey.
Reg Hollinshead, departed this world at the age of 89 last week in hospital. The legacy, he has gifted, throughout his lifetime which has given so much pleasure to so many people, David sets out so beautifully above.

A distinct path showing that horseracing comes in many different divisions as in football. Although to date in British horserace pioneering not defined as such. Just left at present by the powers that be, to be assumed, as everything else to do with the Equus Zone, to be grabbed free, by others and taken for granted.
﻿
﻿
David's closing paragraph:

“Suluk wasn’t a great horse and the races were humble ones, as indicated by the fact that none were worth even £2,000 to the winner. Yet it was still, in its way, a great feat and, in his own quiet way, year after year, Reg Hollinshead carried on giving a great many people a lot of pleasure and setting others on their way to success. We’ll all miss R Hollinshead, , Staffs.” This is an amazing and remarkable equus zone achievement.

Suggestions to start to plan your adventure into horseracing.
Step one:Watch Ch4 Morning Line at home a few times on TV and follow up by watching Ch4 Live action at the races in the afternoon. This gives you a day at the races without leaving home. You can purchase an A4 pad of paper to keep your horseracing notes in and a couple of good files. You may like to get autographs, and photos you may like to collect..
Step two: Find out where the nearest Flat Turf Racecourse is to where you live. The nearest Jumps Turf Racecourse as well. Do you have any All Weather tracks near where you live?
Step three: Find out if there are any licensed racehorse trainers near where you live.
Step four: Check out your local Library to see what horseracing books they have to borrow
Step five : If you have a computer go on line and explore the world of horseracing from there. Like a magical mystery tour of your very own.Take a look at Monty Roberts websites and start to learn about the horses side of horseracing, how athletically fit they need to be as well as the handler riders who care for them every day and ride them out, they need to be as athletically fit as the horses.
Step six : After these five info steps you will find you have  aquired some helpful notes of your own and can then plan a day out at the races, at your local Racecourse,  and invite some of your friends as well. Be sure to get a race card on arrival. You can check out the detail to be found in the Racing Post the day before you go, and on the day you actually take your first journey and have an afternoon out at the races. Get to know your own way round your own Racing Post it is a fine tool and will help you every step of the way. You will get to know Paddy Powers horse if you would like to try a bet, he often pays out 5 places in some races.

﻿
Date for your Diary 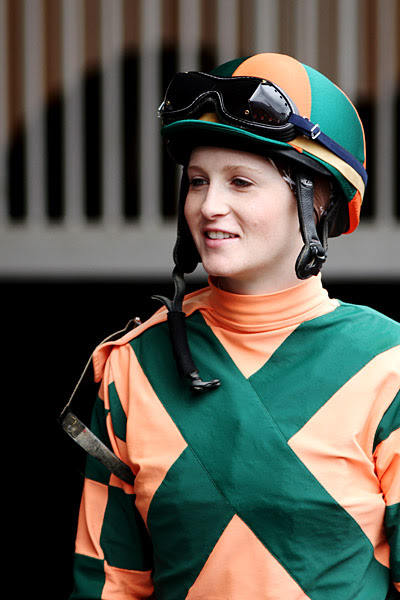 But Stole Our Hearts

The victory went to a horse named Orb, but it was the Kentucky Derby's charming female jockey everyone was watching.
http://www.thedailybeast.com/articles/2013/05/05/rosie-napravnik-didn-t-win-the-derby-but-stole-our-hearts.html
Anna Rose "Rosie" Napravnik (born February 9, 1988 in Morristown, New Jersey) is an American thoroughbred horse racing jockey. The daughter of a horse shoer and a show horse trainer, she has been around horses all of her life. In 2005 she took out her jockey license and since then has been among or at the top of racing jockies' earnings and has been the top female rider in the .
http://en.wikipedia.org/wiki/Rosie_Napravnik