Twice voted journalist of the year
PICTURE: Dan Abraham
Racing Post Saturday March 15th   page 28
"Sire looks a certainty: your festival questions answered
Pic: "Whisper pips Get Me Out Of Here in the Coral Cup. If you were on the runner-up, anti-depressants may be the solution.
My little cat's mum was called Whisper. I first caught a glimpse of Whisper when I was sitting in my friends kitchen. Just her little face (Whisper's) peeping out of a cupboard that was all I could see of Whisper. Here is a pic: of Whisper's daughter Daisy 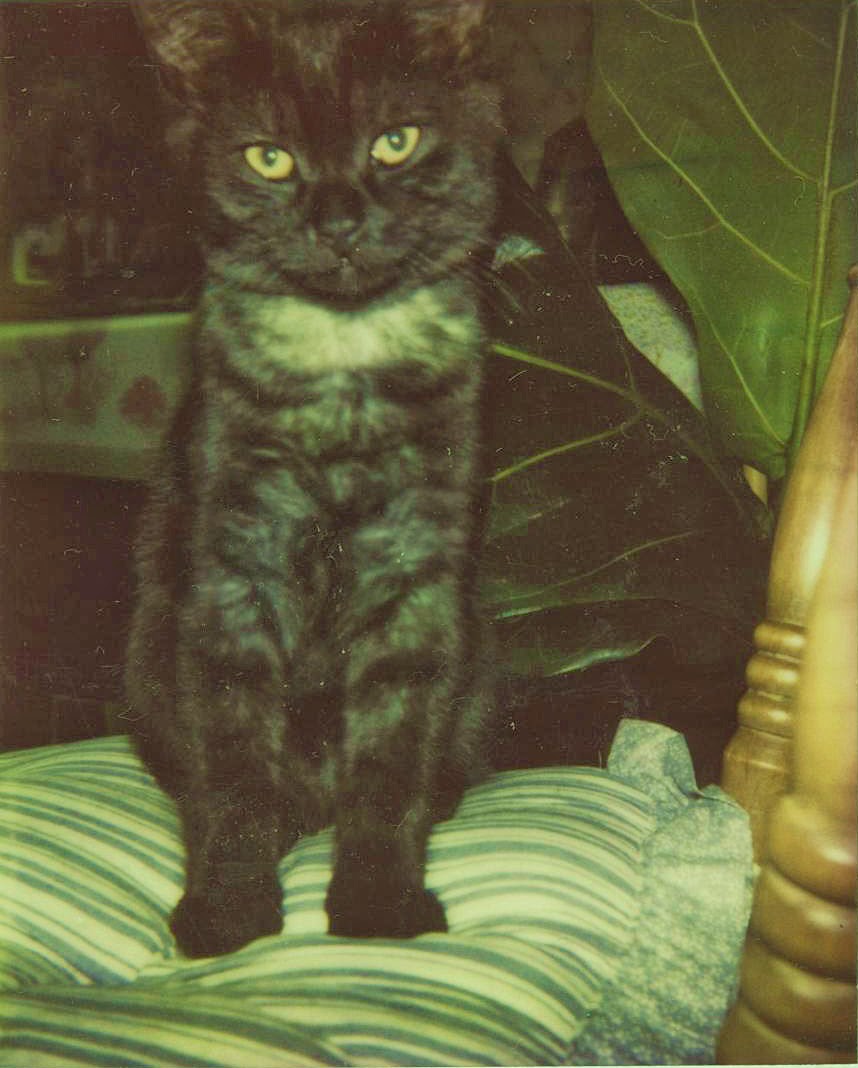 This is Daisy's son Sooty


Sooty - Wikipedia, the free encyclopedia
http://en.wikipedia.org/wiki/Sooty
In 1993 Sooty, Sweep, Soo, Little Cousin Scampi and Matthew all moved to Manchester for Sooty & Co., with the gang running a shop that "sells almost ...


"DURING the Cheltenham Festival we receive many questions from racegoers. It has been my job to answer them. Here, without their permission, is a selection.
"Dear Sir
"I still can't believe Get Me Out Of Here didn't get up in the Coral Cup. A short ******** head! Is there anything I can do about it?
PS I've already sent an abusive letter to Tony McCoy
"Dear Nick
"It may be worth giving citalopram a try. Some people find that watching a program about other people who have lost all their money helps a bit. "
"Dear Sir
David Pipe is a lot taller than Martin Pipe, isn't he? Why's that then?
Dear Peter
Yes. Carol Pipe "
Dear Peter
Yes, Carol Pipe
Dear Peter
Magic Moments

When you see David with his Dad Martin at the races you realise how tall David actually is.


But not so much  when you see David on his own. Have you noticed how observant Martin is at the races? Anything the horse needs, Martin gets. Anything David needs Martin is there with it. One of my magic moments last week was when Dynaste partner Tom Scudamore won the Ryanair Chase. What I call a ping, ping, ping win. Yes, yes, yes a fabulous performance of horse and rider accurately in-tune with each other, every step of the way. 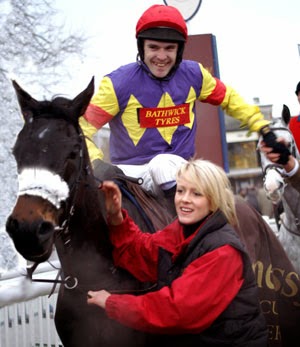 Magic Moment for Team Pipe
Clue: Famous Steeplechase
Winner? Race? Year? Date?
Partner? Minder?
"Dear Sir
This is the last time I'll be coming to the Cheltenham Festival. and I've been coming for 73 years. My Doctor says I've only got three months to live. "
"Dear Reg
I'm  sorry to hear that. Still, if that's what your doctor told you, I expect he's right. Try to  think positively. It has been getting very crowded. "
Dear Reg
Your doctor could be wrong. The British medical profession are all at sea like Daisy up her tree. Entwined in a stranglehold of political red tape.


"Dear Sir
I arrived in on Tuesday, much looking forward to the performance of Schuberts's Trout Quintet at this year's festival. What's going on? "
"Dear Franz
We have looked into this and can see how the problem has arisen. I suggest you come back in July for the Music Festival. In the meantime you might like to enjoy the music in the , or the trout in the Panoramic Restaurant. "
"Dear Sir
A group of us got chatting in the queue for the cash machine and have come up with a simple idea that would make the festival a lot better. Have a maximum field size of 12. It's the only way I'm ever going to find the winner of the Coral Cup. "
"Dear Harry
As you say, its a simple idea but also rather silly. Anyway, you still wouldn't  be able to find the winner of the Coral Cup. It's not a race where you're supposed to find the winner. No- one has ever found it. "
"Dear Sir
This is my first time at and I've found it a bit puzzling. On Thursday a man approached me and said: "You've got a backside like Annie Power. " I don't know Annie Power but perhaps she is a racing lady. Does it mean anything to you? I didn't know whether to be pleased or cross! "
"Dear Katie
It was a compliment. Annie Power is a woman with a notably fine bottom. "
"Dear Sir
My son and I have been having a bit of an argument and wondered if you could settle it with us. He says Sire De Grugy is a certainty for the Champion Chase while I say doesn't suit him and he won't win. What do you think? "
"Dear Garry and Jamie
On balance, I think your  son is right Sire De Grugy will definitely win. It's just a matter of by how far? It wouldn't surprise me if he won by six lengths. "
Dear Garry and Jamie
On balance, I think your son is right as well, and a lot of other people including David thought the same of Sire De Grugy, he has performed so well to win in all his races easily, an SP of  11-4 at Cheltenham.


A word of warning there is never a certainty in Jumps Racing. Because sometimes the tiniest mistake made in a race by one horse and rider can bring a lot of the other horses down like a pack of cards as we saw last week several times.


Have you heard the story of Charlie Day? Who died disputing his right of way. He was right, quite right as he drove along. But he's just as dead as if he'd been dead wrong.

" Dear Sir
On Tuesday I backed Champagne Fever, My Tent Or Yours and Shotgun Paddy. On Wednesday I backed , Get Me Out Of Here and Any Currency. On Thursday it was Southfield Theatre. I am thinking of killing myself. What can I do?
"Dear Ernest
Your own suggestion seems a reasonable one. Did you back him each-way?
"Dear Sir
Is there anything more irritating when you have been beaten a short head than someone asking: "Did you back it each way? " I think not. "
"Dear Lucy
I think you're right. "Your money's only lent" is pretty irritating but not as bad."
"Dear Sir
Would you believe it? I'm from Rochdale and in 1996 I went to their game against . 's in South Wales and 's in but I didn't think of it until after won the Pretemps Network Final. How unlucky can you be? I hate racing. "
"Dear Stephen
I sympathise with you because, only last week, I commented on how many hawks you see nowadays and, lo and behold, Hawk High wins the Fred Winter Juvenile Hurdle at 33-1. So you don't need to tell me about bad luck. "
Dear Stephen
The Fred Winter Juvenile Hurdle is always a good race to pay special attention to because you will get a good guide to some of the very best novice hurdlers and their connections (trainer team - owner ) a good race to follow to make up your own Jumps Reference File of the horses who ran in this last week. Hawk High! the winner for instance what Trainer Team and Owner connect to Hawk High?  Who was second to Hawk High? How many lengths did Hawk High win by? Who was third ... etc. Check out in the Racing Post the next day the results, RP give good info of how all the races pan out to be.  Note down in your own Jumps File all detail available on the runners that caught your eye in this race.
"Dear Sir
I don't really like racing but I come to the festival every year to buy clothes. They have things I only seem to be able to find at . Do you know if there is anywhere else I can get them? "
"Dear Charlotte
No, I'm afraid not. They do only sell them at . "
Dear Charlotte
You can get this information from the people who have the shops at Cheltenham Racecourse just ask them to give you their contact number, address etc.

Daisy  "hello its you again"
﻿

Rock on Ruby partner Noel Fehily found it tough at the third fence, made a bad mistake nearly losing Noel, who just managed to cling on, but lost his whip. Rock on Ruby has lost his way a little bit over the big fences. So much bigger than the hurdles which he skimmed over with such ease and success.

Perhaps that is part of the problem he is tackling the fences like he used to tackle the hurdles. Noel will find out the root cause of such mistakes. It is really tough for the horses when they have to compete at speed in a race with many other horses all around them to distract him, bring him down even, can happen so fast, like greased lightening. Very dangerous.

Daisy takes a nap
THURSDAY MARCH 20th
NEWS
Ruby set for one more run after festival flop
"ROCK ON RUBY, who finished a well-beaten eight of nine in the Racing Post  Arkle Chase at Cheltenham, is set to have one more start this season when trainer Harry Fry is confident he has got over the experience of suffering his first defeat over fences, writes Jon Lees' .
"The former Champion Hurdle winner blundered away his chance at the third fence, where jockey Noel Fehily lost his whip, but completed the race to finish  52 lengths behind winner Western Warhorse. (Team Pipe)
"Fry said: "His race was over at the third. Noel performed a minor miracle,  the sit of the week, to keep the partnership intact but after a mistake like that it was all over. His confidence took a bit of a knock and he made a few smaller mistakes after. We will get him going at home before confirming his next target. I'm very much hoping to get him out again this season.
"The stable's main runner at the Grand National meeting will be Activial  in the 4yo Juvenile Hurdle, the winner of the Adonis Hurdle having bypassed the Triumph Hurdle to wait for Aintree.
"Activial is on target for the four-year-old hurdle, " Fry added. "I'm really looking forward to running him after his good performance in the Adonis. Mendip Express didn't go to and is on target for the Scottish National on April 12. "

NEWS:
"Fenton (IRE) drugs hearing to resume today
"TRAINER Philip Fenton should learn today when he will face trial for possession of anabolic steroids, writes Jessica Lamb. "
Put in the hands of The Department of Agriculture totally useless no way should a matter as this be so flippantly tossed to this Bloodhorse Illiterate  Department of Agriculture, not nearly good enough.  The problem being a refusal of horseracing government in both Ireland, Britain, India and in America people in these countries have absolutely  no respect for the racehorses or the people who work with them every day.  No recognition whatsoever of the part played by the racehorses, that there is a key Equus Zone missing in these four countries to handle all this side of things Britain, Ireland, India and America no doubt same  throughout other  countries who go to make up global horseracing.

WHY not have a adventure day of your very own tomorrow at the races with CH4 Horseracing Team at home in the warm?