C4 LINK UP LIVE WITH NEWBURY AND AYR TODAY, TO BRING US THE MORNING LINE 7.55am to 8.55am EVERY SATURDAY DON'T MISS IT

C4 FOLLOW UP WITH THE LIVE ACTION FROM THESE
TWO RACECOURSES THIS AFTERNOON
www.channel4.com/sport/microsites/H/horse_racing/

THROUGH THE KEYHOLE THE CLUES ARE THERE, WATCH THE MORNING LINE EVERY SATURDAY AND LET THE TEAM HELP YOU TO ORGANISE YOUR AFTERNOONS' RACING ACTION.


An interesting and entertaining program providing previews, key current news, updates, reviews all relevant to this afternoon C4 live action from the two racecourses as above.


THE RACING POST BRING US “THE RETURN OF FRANKEL”
LEE MOTTERSHEAD REPORTS ON THE FACINATING COLT FRANKEL AS HE SETS OUT ON HIS THREE YEAR OLD CAMPAIGN AT NEWBURY IN THE GREENHAM STAKES
THIS AFTERNOON AT 3.10pm.
“It’s the moment we’ve waited all winter for as last season’s champion juvenile and red-hot 2,000 Guineas and Derby favourite steps out on the track again for the Greenham Stakes at Newbury.
“Eagerly awaited doesn’t begin to describe it . The day Flat fans have longed for all winter is finally here.”

“Hearts will beat faster as the moment draws near. This day, and indeed the Flat season’s spring awakening , revolves around the return of FRANKEL.

“Rarely has a colt embarked on a Classic campaign with so lofty a reputation or such unshakeably strong credentials.

“Nor can a star on the Flat have emerged from winter hiding with the enormous goodwill that is willing him to succeed.

“The FRANKEL we saw at two was exceptional , a juvenile of the very highest order, but the slate has been wiped clean. All that he did then counts for nothing in the here and now.


“There are many reasons to be positive but Cecil, without a win at this week’s Craven meeting, is remaining calm and measured on the cusp of his renaissance’s most pressurised afternoon.
‘Win or loose, he will come on quite a bit for the run,’ said Cecil. ‘I’m very happy with him, but he needs a trial before the Guineas. I’d like to see him run very well but I do know that he will improve for the race. We haven’t been able to get him on the grass but hopefully he has done enough to give a very good account of himself. We’ll see.”

FRANKEL WINS EASILY THE GREENHAM  STAKES THIS AFTERNOON. VERY EXCITING, HENRY CECIL HIS TRAINER WILL BE WELL PLEASED.
DID IT WELL 'ALL HANDS AND HEELS QUEALLY.'
C4 HISTORY IN THE MAKING ‘ THE NEW LIVE MORNING LINE’
HORSERACING TEAM TODAY ARE:
NICK (Lord Snooty) LUCK HOST PRESENTER, BROADCASTER
Bloodhorse Illiterate
GUEST STAR RICHARD HANNON JUNIOR. BLOODHORSE LITERATE
Normal service resumed as MAGIC CITY blitzes home at Newbury yesterday.
(Friday 15.04.2011) winning by six lengths. Follow the Hannon Team this year? Who knows what is in store? Hannon’s website holds many clues, take a look you will not be disappointed.
http://www.richardhannonracing.tv/news.php
http://www.richardhannonracing.tv/news.php
JOHN (Greatest Jockey) FRANCOME BLOODHORSE LITERATE A lifetimes experience
to date, shared with the greatest professional horsemen and the greatest racehorses.
http://www.amazon.co.uk/John-Francome/e/B001H6GYLU/ref=ntt_dp_epwbk_0
http://www.amazon.co.uk/s/?ie=UTF8&keywords=john+francome+autobiography&tag=googhydr-21&index=stripbooks&hvadid=4795221559&ref=pd_sl_90p7j5pdbw_b
JOHN (Mac) McCRIRICK THE PUNTERS CHAMPION
Mac has a weekend off. Happy Birthday Mac for tomorrow, hope that you have a wonderful day.
http://en.wikipedia.org/wiki/John_McCririck
RICHARD HOILES
Broadcaster, Presenter
Bloodhorse Illiterate
http://www.blogger.com/publish-confirmation.g?blogID=57417992004413626&postID=1096560419346603862&timestamp=1302960845996&javascriptEnabled=true
http://www.blogger.com/post-edit.g?blogID=57417992004413626&postID=1096560419346603862
MIKE CATTERMOLE
Broadcaster Presenter
Bloodhorse Illiterate
http://search.conduit.com/ResultsExt.aspx?q=Mike+Cattermole+horseracing&SearchSource=4&ctid=CT2953735
http://search.conduit.com/ResultsExt.aspx?q=Richard+Lee+C4+broadcaster&SearchSource=4&ctid=CT2953735
TOM LEE THE PUNTERS FRIEND
Form specialist, broadcaster. Up to the minute on line betting stats. Market movers.
Bloodhorse Illiterate
http://tips.betting-directory.com/about-tom-lee/
http://tips.betting-directory.com/
DATES FOR YOUR DIARY: HEARTS WILL BE RACING
BOTH LAMBOURN, DOWN SOUTH, AND MIDDLEHAM, UP NORTH, HOST AN OPEN DAY NEXT FRIDAY, GOOD FRIDAY 22 APRIL ALL THE RACING STABLES WILL BE OPEN TO THE PUBLIC ON THIS DAY.
OFFERING A CHANCE TO MEET UP WITH YOUR FAVOURITE RACEHORSES AND THOSE WHO CARE FOR THEM AT HOME EVERY DAY.
WHERE ALL THE WORK IS DONE TO PREPARE THESE HORSES FOR COMPETITION ON THE TRACK, WIN LOOSE OR DRAW.
PAUSE FOR THOUGHT
C4 this morning welcomed DR TIM MORRIS on the 7.55am  program  – MORRIS  Director of Equine Science and Welfare for the British Horseracing Authority, and asked him what the BHA regulators have to say  about the dreadful outcome to last Saturday's Grand National. Paying attention and showing the many newspaper headlines of the horrific events that occured during the race.
Clearly Dr Tim was completely out of his depth on issues such as these, his bloodhorse illiteracy blatantly obvious.
DR TIM MORRIS' BACKGROUND:
"Dr Tim began as Director of Equine Science & Welfare in January 2008. He previously worked at GlaxoSmithKline and brings to the Authority a wide experience and expertise in veterinary science and animal welfare.
After qualification from the Royal Veterinary College, he spent some time in thoroughbred stud and mixed veterinary practice before returning to the College to complete a PhD.
Since then he has held a range of roles in research, clinical veterinary medicine and in public affairs for GlaxoSmithKline.
He is a visiting professor at the University of Nottingham School of Veterinary Medicine and Science and held a large number of roles in veterinary professional organisations, industry bodies and animal welfare charities."
Doctor Tim whose perspective within  Equine Science and Welfare, nothing at all to do with  Bloodhorse Literacy so well out of his depth and perspective here 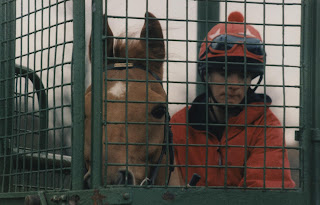 HORSERACING A UNIQUE AND REMARKABLE SPORT
Bloodhorse Illiteracy among thoroughbred racehorses in training needs to be recognised for what it is, one of the most dangerous areas for such a person to be in. Such a bloodhorse illiterate person in and around horses is inviting danger and can easily create much greater danger.
Posted by Turfcall at 01:41

Email ThisBlogThis!Share to TwitterShare to FacebookShare to Pinterest
Labels: Easter holiday coming up go and meet your favourite horses at home