LINK TO THE LIKELY FIELD CHALLENGING FOR THE AINTREE GRAND NATIONAL 2011
http://www.grandnationalpro.com/category/Grand-National-News/Grand-National-2011--The-likely-field-for-the-Aintree-marathon-201104040009/

AINTREE LIVERPOOL THE HOME OF THE GRAND NATIONAL
http://www.aintree.co.uk/pages/grand-national/

BIG FELLA'S OWNERS DREAM OF NATIONAL WIN
Larger- than- life owner Harry Findlay has sold leading John Smith's Grand National contender BIG FELLA THANKS for an undisclosed sum. Triggering a John Smith's Grand National dream for his enthusiastic new owners ...
The nine- year -old, who is as short as 12-1 for the National with Victor Chandler, will race in the  blue colours of Fawbert and  Williamson, after Findlay rejected bigger offers which would have taken the horse away from trainer Ferdy Murphy.

BOB CHAMPION ANNOUNCES THAT AINTREES  LEGENDS CHARITY RACE, SUPPORTED BY JOHN SMITHS, WILL BE RUN ON JOHN SMITHS GRAND NATIONAL DAY SATURDAY 9 APRIL 2011.
In 1981, in the year that Charles married Diana, Shergar won the Derby and Bucks Fizz won the Eurovision Song Contest, Bob Champion (recovering from testicular cancer) and Aldaniti (recovering from a serious leg injury) created a real life fairy story by winning the Grand National.
30 years later – and a few weeks before William marries Kate – Bob Champion will ride on that hallowed Aintree turf once again, on John Smith’s Grand National Day 2011, in a special Bob Champion Aintree Legends Charity race, supported by John Smith’s.
The race will be run on the flat as the first race on the John Smith’s Grand National card on Saturday, April 9.
Bob will be joined by a number of retired Grand National winning jockeys as well as some other legends of the weighing room. The line-up already includes the likes of Graham Thorner (1972, Well To Do), Ben De Haan (1983, Corbiere), Hywel Davies (1985, Last Suspect, Brendan Powell (1988, Rhyme ‘N’ Reason), Jimmy Frost (1989, Little Polveir), Marcus Armytage (1990, Mr Frisk), Carl Llewellyn (1992, Party Politics & 1998, Earth Summit), Tony Dobbin (1997, Lord Gyllene), Jim Cullotty (2002, Bindaree) and Peter Scudamore (eight-time champion jockey although he never won the National) and Charlie Swan (10-time Irish champion jockey).
The race will be run in aid of the Bob Champion Cancer Trust, which was founded in 1983 and which has so far raised £12 million – that’s approximately £400,000 for every fence of the National that Bob and Aldaniti jumped!
Bob Champion said: “The 1981 Grand National was a remarkable day, not just for me, but all of those around the world who gained hope from my victory in their personal battles against cancer. 30 years on and with the money this race raises, I want to continue to reduce the odds against cancer. I would also like to publicly thank Aintree and John Smith’s in advance as without their enthusiasm and support, this exciting race would not be possible.”
John Smith’s and Aintree launched the John Smith’s Grand National Legends in 2010, an initiative that celebrates the greats of Grand National history. Eight Racing greats were inducted last year after a public vote and the 2011 shortlist will be announced in the New Year.
Mark Given, Brands Director at Heineken UK, brand owner of John Smith's, added: “We are very pleased to support the Bob Champion Cancer Trust and I'm sure the Aintree Legends Race will make an excellent contribution to the John Smith's Grand National day card. The race has already attracted a fascinating line-up of jockeys and the spirit of the event ties in well with the John Smith's Grand National Legends campaign launched last year. ”
Julian Thick, Managing Director of Aintree, agreed: “We are absolutely delighted to host this exciting event on racing's biggest day. Bob's story is inextricably linked to the Grand National and we are honored to be able to help his fantastic fundraising with what should be an interesting race on John Smith's Grand National Day.”
For further information please go to:
Website: http://www.bobchampion.org.uk/
Facebook: Bob Champion
Contact details:
Bob Champion Cancer Trust: Lucy Wilkinson or Liz Ampairee
Lucy - Tel: 020 7924 3553 / 07973 133685 / lucy@bobchampion.org.uk
Liz - Tel: 0773 333 1945 / liz@lizampairee.com
http://www.aintree.co.uk/news/bob-champion/ 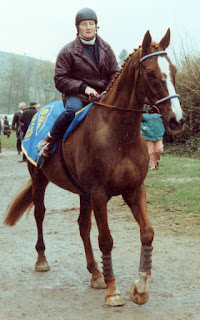 HANDLER RIDER BERYL MILLAM CARED FOR ALDANITI THROUGHOUT HIS LIFE TIME
http://branches.pcuk.org/lordleconfield/mounted-games/
THIS IS FINDON VILLAGE  CREATED BY VALERIE MARTIN
http://www.findonvillage.com/0134_aldaniti.htm
THE GRAND NATIONAL "HOW IT ALL BEGAN"
http://bobchampion.com/the_grand_national_how_it_all_began.html
http://www.youtube.com/watch?v=l0dilqfsE3w&feature=player_embedded
END

Email ThisBlogThis!Share to TwitterShare to FacebookShare to Pinterest
Labels: The Grand National at Aintree how it all began