“THE most extraordinary scenes linked to yesterday’s Crabbie’s Grand National took place not on the racecourse but behind closed doors as 39 of the 40 riders staged a mass revolt by collectively refusing to leave the weighing room to hear the outcome of a stewards’ inquiry into farcical scenes at the start.

“All riders with the exception of Brendan Powell, who’s planted himself at the start, now face punishment by the BHA after not a single jockey obeying the stewards’ instruction to hear the result of their deliberations.
“Professional Jockeys Association chief executive Paul Struthers said : “The jockeys were very unhappy with the conduct of the inquiry and they therefore refused to go back in. It was a decision the jockeys collectively  took. It only required one jockey to go back in for the inquiry to be concluded, but as a collective not one of them was willing to go back in. I also declined the invitation.

“It is obviously a shame but I’m not sure it would be fair to put this solely at the jockeys’ door. “
“The case will now be referred to BHA headquarters where a panel will not only make public the suspension s dished out to the 39 jockeys  for their actions at the start but additionally decide how to deal with their act of rebellion.

“Yesterday’s inquiry has been called to determine why all but one rider attempted to form a line before the Grand National’s official 4.15 start had been reached.  Minutes later an official false start was recorded after the tape was broken.

“The inquiry concerned whether the riders had lined up before being invited to do so and subsequently disobeyed  the starters’ instruction’s, additionally putting the safety of assistant starter Simon McNeill at risk when he was knocked down as the riders moved forwards towards the start. “


Simon McNeill and the rest like him need to get out of horseracing before they get killed. Their bloodhorse illiterate mind-sets put them in the Danger Red Alert Zone. No one can expect to stand in front of 40 horses lined up to start in a Grand National thinking they alone can stop them. Bloodhorse Illiterate madness.


Doctor Richard Newland  GP stated to be a licensed  British racehorse trainer. ('for fun' he say)

The life and times of Doctor Richard Newland GP  career path has been in General Medical Practice working as a Doctor very different from a career in handling riding and training racehorses..  Did he choose a medical career path for fun as well?.

Looks like Doctor Newland has been granted a training license in error.

THE LIFE AND TIMES OF PINEAU DE RE


Mainly this horse has spent much of his lifetime in training with Philip Fenton in . He had his debut on the Flat in 2008 as a 5 year-old.  Connections of this horse whilst with Fenton throughout from 2008 to 2013  over these 5 years,  he has achieved 7 wins, 6  seconds and 4  thirds.  The total he won before Saturday’s National £98,000. He performed consistently over the years from 2005 through to 2013 whilst with Fenton.  He changed hands last year moving from Fenton to Dr Richard Newland last year.  Dr Newland needs to thank his lucky stars the background handling that Fenton gave Pineau De Re  has paid out in dividends and that Dr Newland has become the financial beneficiary cashing in big time for all Fenton’s careful guidance, and sound working practices his true bloodhorse literate knowledge that has prepared Pineau De Re (FR) throughout most of his lifetime to date.  Fenton has allowed this horse to achieve what he has achieved to date. The person who has cashed in Doctor Newland.

Jon Lees reports : ( rp yesterday)  “Newland’s full- time job is running a private practice in Birmingham, as well as four other businesses, but the part-time pursuit he calls his hobby delivered the ultimate health and wealth boost when his first starter in the race  Pineau De Re, gave him the victory his professional rivals have been striving to achieve for years.  (Racing Post Sunday April 6.)

After which the horse was bought privately for long-term owner John Provan last May after he had won the Uster National for Team (Philip) Fenton.

Leighton Aspell a truly great horseman. Just goes to show how badly top horsemen are treated by the bloodhorse illiterate political and horseracing government how Aspell’s  life and his career have been messed up, and blighted by such as these. As have the life and times of Irish trainer Philip Fenton.
Bloodhorse  Illiteracy  in practice  is a Cruel and Criminal Act.

It is Team ( Philip) Fenton (equus zone) who has done all the homework with Pineau De Re ongoing from the outset of this horse’ s racing career.  A massive  mighty compliment to Philip Fenton and his team.  Dr Richard Newman ( gp medical zone) needs to be careful he doesn’t get carried away by Saturday’s success, or kid himself it is all his own input that has achieved greatness through Pineaur De Re.

Training racehorses is a full time job and some, Newman does not belong in the Equus Zone.  Newman’s career life journey has been formed and built in medical practice applicable to the two legged variety.

Pineau de Re - Wikipedia, the free encyclopedia
http://en.wikipedia.org/wiki/Pineau_de_Re
He won on his debut over obstacles at Limerick on 17 November 2010. ... On his final appearance before the Grand National, Pineau de Re ran for the first time ...

Leighton Aspell - Wikipedia, the free encyclopedia
http://en.wikipedia.org/wiki/Leighton_Aspell
After a false start, Aspell and Pineau de Re won the race by five lengths at odds of 25/1, ... "Leighton Aspell wins Grand National on Pineau De Re at Aintree".


"IF AT first you don't succeed, you're supposed to try again. So this is my final column. I'm retiring - again. At the risk of repeating myself (an increasing risk), it's more than 20 years since I started writing a weekly column, first for The Sporting Life and then for the Racing Post.


It's a privilege to have the writing freedom a column, and supportive editors, provide, but it gets hard to think of fresh ideas and, when that happens it's time to stop before things go badly downhill.


It's been great working with a lot of people I like in a sport that has more than its fair share of likeable people. That's been one of the best parts of it. So thank you to everyone in racing who has helped give me a wonderful working life, and to workmates in and out of the office, where they have dealt with mountains of words with good humour, and to readers, if any.


People tend to assume my retirements are due to having prostate cancer but they're not, except that it makes you more aware that time is limited. Countless people live with cancer, and worse. Although they haven't been able to cure mine and it will eventually kill me (unless too many photo-finishes get to me first), it's going to take a while, a bit like a lot of the horses I've backed. I'm 65 and something or other is always going to come along and get you.


But compared with the horrendous, life-limiting injuries some jockeys have suffered, including the extraordinarily brave Sharron Murgatroyd, who died a week ago, my problems are trivial. I have great respect and admiration for jump jockeys. If I had half the guts and spirit they have, I'd be pleased with myself, and it will be on display again today, as it is every day, at Aintree.


So, it's time for a final stab at tipping the Crabbie's Grand National winner. The great thing about tipping (especially when no-one takes any notice of your tips), is that failure is soon forgotten (especially by the tipster) and hopefully forgiven.


It's a year (obviously) since my last National tip - Rare Bob, advised at 25-1, who finished a creditable fifth at 16-1; one of my better efforts. I was going through a spell of retirement during the two previous Nationals but in 2010 I actually tipped the winner, Don't Push It, at 25-1 (SP 10-1). That means, to a level stake, followers can back more than 20 losers in a row before they're entitled to complain.
It's surely not necessary to go back further than 2010 but, if we must, my selections were Parsons Legacy (2009, fell), Turko and Madison Du Berlais (2008, both fell) and Billyvoddan (2007, pulled up). No wonder I'm retiring.


It would be nice if this year's selection had the decency to at least complete the course. I'm not convinced Long Run will, despite the fact he's never fallen. If he returns to somewhere near his best, Long Run could eat most of his opponents today for breakfast but he does tend to put in a sloppy jump now and then, possibly while wondering what's for dinner. The National course isn't a good place for daydreaming.


I hope I'm proved wrong because Sam Waley-Cohen adds something to the sport and is certainly good enough. On Thursday he enhanced an already outstanding record over the National fences on Warne in the Fox Hunters' Chase, a race he also won in 2005 and 2006 on Katarino, and in which he had finished runner-up twice. He won the 2006 Topham Chase on Liberthine, then finished fifth on the same horse in the 2007 National. Then, on Oscar Time, he finished second in the National in 2011 and fourth in 2013. You don't have to worry about the rider, only the horse.


Most tipsters simply try to give the winner, which I think shows a feeble lack of ambition. The first three, in the correct order, will be: Rocky Creek (18-1), Teaforthree (8-1) and The Package (25-1).
I could provide reasons, and jolly good ones, but reasons aren't what you need; results, that's what you need, and it's results that I intend to provide.


My final tip is this. If you're a man aged 50 or over, do ask your doctor about having an annual PSA test. It could save your life. Now, I'm off racing, because that's what I still love.

Many thanks for all your entertaining columns over the years - especially the nap hand of every racecourse in the British Isles and trying to win (and sometimes succeeding) £1,000 before Christmas. You will be remembered.
jeremym,
United Kingdom

Please unretire again - My most treasured book and favourite read over and over is your
" A Punting Life " - the stories of Morley and Hyde are hilariously respectful as are all
your writings. Thanks for the fun - All The Best
Andrena,
Canada

all the best the column will be sorely missed may you have many more gn tips to come via twitter maybe ?? enjoy the day
ashburnham,
United Kingdom

Many thanks Sir David (post race) for yrs of witty entertaining &self deprecating writing turning the ordinary into the extraordinary &for your academic dissection of the racing & betting industry-The greatest writer of racing short stories since Bukowski
joeking,
United Kingdom

Well done Sir and all the best for the future. It''s been a pleasure.
and2pacalypse,
United Kingdom 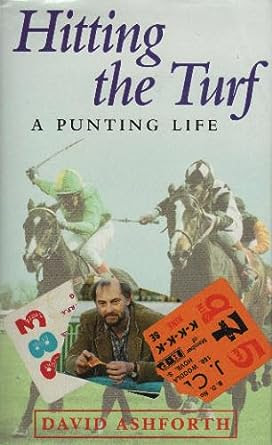 http://www.amazon.co.uk/Hitting-Turf-punting-David-Ashforth/dp/0747216819
TOWCESTER RACES: Smart Exit proves a smart choice in ...
http://www.northamptonchron.co.uk/sport/races/towcester-races-smart-exit-proves-a-smart-cho...
20 Jan 2014 ... 1.40pm Macmillan Cancer Support Charity Handicap Steeple Chase at Towcester yesterday. ... Just for good measure, the Macmillan team, in which I was proud to ... Ironically, one of Old's owners is the Racing Post writer David Ashforth who has himself been embroiled in a battle with prostate cancer.
Posted by Turfcall at 20:44